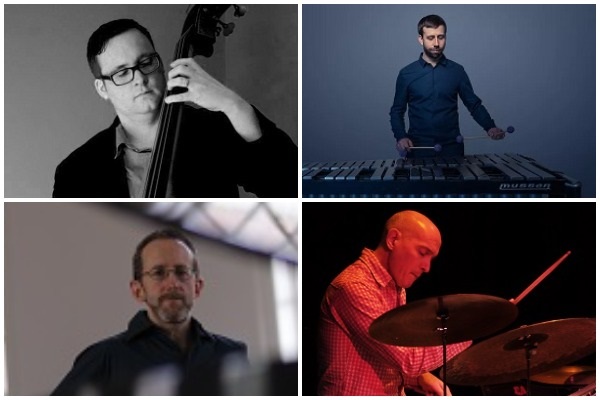 Recording of their performance on 7/21/21

Joel Kelsey is a freelance double bassist, bass guitarist, and composer living in Silver Spring, Maryland. Kelsey received his Bachelor of Music in Jazz Studies from Indiana University in 2004, and his Master of Music in Jazz Studies from the University of Illinois in 2011. Kelsey studied with David Baker and Bruce Bransby at Indiana University, and Larry Gray at the University of Illinois. Joel has performed with artists such as David Baker, Jon Faddis, Bobby Shew, Conrad Herwig, The Chicago Jazz Orchestra, Rob Dixon, Jerry Weldon, and Darius Brubeck.

Chris Barrick is a percussionist, jazz vibraphonist, drummer and educator with wide experience in multiple musical genres, including as an orchestral percussionist and in theater productions. ?As a jazz vibraphonist and drummer, Chris has performed and recorded with many great musicians in Cincinnati and DC, including Brad Myers, whose 2015 recording Prime Numbers earned a four-star review in Downbeat Magazine. He is currently Director of Percussion with Maryland Classic Youth Orchestras and a Washington Conservatory of Music faculty member.

One of the  DC area's most in-demand jazz artists, pianist and educator Harry Appelman has performed on five continents. He was a member of the 2008 Latin Grammy-winning Afro Bop Alliance, contributing several arrangements to the group's recordings.  He has also played with many other greats on today's jazz scene. A two-time recipient of Maryland State Arts Council Awards for composition (2012 and 2018), he was also a prize winner in the 1988 Thelonious Monk International Jazz Piano Competition and 1989 Great American Jazz Piano Competition.

Drummer Dominic Smith has been a fixture on the jazz scene for more than 30 years, playing with the cream of the crop of local players as well as visiting musicians from New York and elsewhere. Dominic has appeared as a sideman on more than 50 recordings. His hard-swinging groove, use of dynamics and rhythmic subtleties have been utilized by such jazz notables as Eric Alexander, Harold Mabern, James Williams, Charlie Byrd, Phil Woods, Gary Thomas, Jim Snidero, Kenny Rankin, Dennis Irwin, Ray Bryant, Keter Betts, Charles McPherson and George Garzone to name a few.