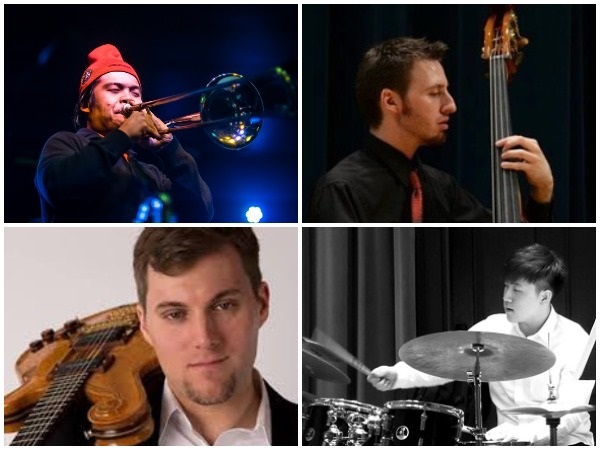 Jazz guitarist Kevin B. Clark has been described as “one of the stars of tomorrows' jazz guitar.” His unique approach to the electric guitar, combining a highly refined technical prowess with a style of playing that is unique to his personality, sets him apart from his contemporaries.

Shawn Simon was born in Dover, Delaware and started taking piano lessons at the age of 9.  In the 5th grade, he learned the trumpet and continued to play all throughout high school.  At 16 years old, he taught himself the electric bass, and a year later, took lessons on the double bass.  He received his bachelors degree at East Carolina University in Jazz Performance where he studied jazz bass (both electric and double bass) under professor Carroll V. Dashiell, and took classical bass lessons from Leonid Finkelshteyen. At 24 years old, Shawn just received his Master's Degree at Towson University in music performance where he studied jazz bass under Jeff Reed.

Jazz Percussionist Byung Kang is an in-demand drummer, educator, and session player in the DMV area. His experience studying and performing with Gary Thomas, Nasar Abadey, Blake Meister, Paul Bollenback, and Alex Norris have shaped his unique sound of both traditional and modern drumming.