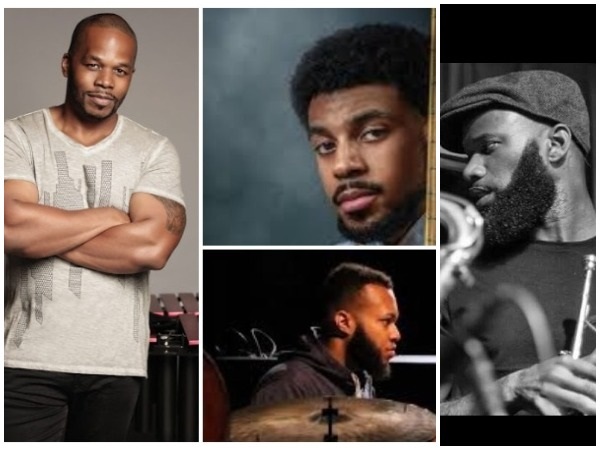 Brandon Lane is a multi-instrumentalist, composer, arranger, and producer/engineer from Richmond, VA. As a full-time musician and producer, he works in various musical styles and settings, including production for media (most recently producing the theme song for actress Tika Sumpter’s podcast “The Suga”). Upon completing a jazz studies graduate program in 2018, Brandon released a self-produced, Top 100 Indie-charting EP in 2019 entitled OLDSOULMUSIC to rave reviews.

Corey Fonville, an influential drummer in today's music scene, has dedicated his life to learning the craft and its history in order to be one of the best drummers of his time. As an artist and music enthusiast, he studied a variety of genres, mostly through his father’s music collection, which generally consisted of jazz, R&B, alternative, and funk. His skills are rooted in an eclectic background and call attention to the fact that music is hard to typify. Originally from Virginia Beach, Corey first started creating a buzz after high school when he attended New School for Jazz and Contemporary Music.

While he lived in New York City, he played almost every night with prominent artists from the city and quickly made close connections with influential musicians. He left New School to study drums at the Dave Brubeck Institute in Stockton, CA. Almost immediately after completing his studies at The Brubeck Institute, he began traveling the world with notable artists such as Nicholas Payton, Jacky Terrasson, and Christian Scott. He currently tours with the Nicholas Payton Trio and is a member of the Christian Scott Quintet. His own band, Butcher Brown, completed West Coast tours in 2012 and 2014. He plans to continue recording with them and to keep building a national fan base.

Theljon Allen is a native of Baltimore. He began playing trumpet in the sixth grade, attended Randallstown High School and went to college at New School University. Since school, he has had the opportunity to play and/or record with many music acts such as Ledisi, Janet Jackson, Lonnie Liston Smith, Cyrus Chestnut, and many more.