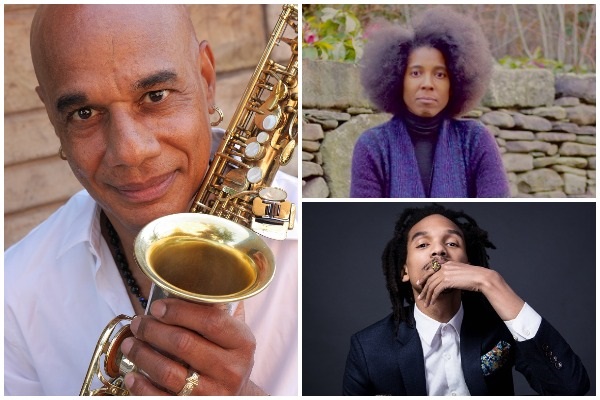 T.K. Blue and the Mentors

"The birth of the Mentors Trio came out of a performance last August '21 in Baltimore with the T.K.Blue Quartet. This band featured pianist Janelle Gill and my dear friend tap dancer extraoenaire Joseph Webb traveled from Wash DC to sit in with the band. The result was quite amazing!!

"Quite often many folks find themselves without proper parental guidance growing up into adulthood. The personal "Mentors" we choose for help, guidance, wisdom, and advice are extremely important. I have been blessed to have many adults in my life during adolescence who aided me with knowledge and they were profoundly positive role models: pianist Patti Bown with trombonist Melba Liston, saxophonist Billy Mitchell, and tap dancer Conrad Buckner aka "Little Buck".

The Mentors Trio is in dedication to all the great role models and mentors who help shape the lives of so many in an immensely positive fashion."

Blue’s 12th CD as a leader, The Rhythms Continue, is dedicated to NEA Jazz Masters Dr. Randy Weston and trombonist/composer/arranger Melba Liston. T.K. composed and performed music on the soundtrack for independent film, “Queen City” starring actress Vivica A. Fox. Mr. Blue conceived and performed The Motherland Connections, manifesting the African roots of Jazz, and then spent a month in Senegal where he performed in Dakar. The documentary film “In The Face of What We Remember: Oral Histories or 409 and 555 Edgecombe Avenue”, features music composed by T.K. Blue.

During the pandemic, Mr. Blue performed a streamed performance “Latin Bird” with his sextet, in dedication to the 100th Centennial of Charlie Parker’s birthday. T.K. is also featured in two recent books.

Joseph Monroe Webb is an award- winning multidisciplinary artist and educator. Webb has secured acting roles on the silver screen and in theatre, including Martin Scorsese’s film Bringing Out the Dead, on Broadway in Bring in da’ Noise, Bring in da’ Funk, and the Signature Theatre’s productions of Jelly’s Last Jam (Outstanding Supporting Actor in a Musical - Helen Hayes nominee) and The Scottsboro Boys (Outstanding Ensemble in a Musical - Helen Hayes Award). Joseph is a 2021-2022 NextLOOK artist-in-residence where he is devising and choreographing a new work titled Prayers for a Hopeless Romantic: A Lovers Rock.

A native Washingtonian, Janelle Gill began her musical path at the age of 5 with piano instruction. As a middle school student, Janelle was introduced to jazz by Delfeayo Marsalis when he performed a workshop at her school. She continued her studies at the Duke Ellington School of the Arts with saxophonist Davey Yarborough and at Howard University under the tutelage of Dr.Raymond Jackson and Charles Covington. Janelle has performed with Oliver Lake, The Blackbyrds, Delfeayo Marsalis, David Murray and many local artists. She can be heard on recordings by Kenny Rittenhouse, Mauro Marcondes, Kris Funn and Will Smith. Currently Janelle teaches piano and is working on writing and preparing music for her debut recording.