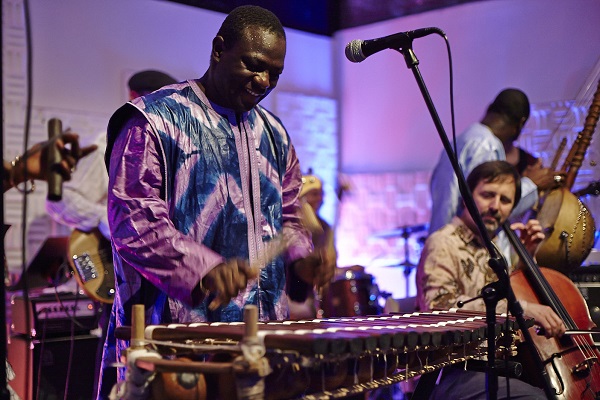 Famoro Diouabté is recognized as one of West Africa’s most talented and graceful balafonists. Hailing from Conakry, Guinea, Famoro comes from a long family lineage of griots (or jeli in Malinké), African oral historians and musicians who played in the royal courts since the 13th century. The balafon is a 23-key wooden xylophone in diatonic scale, crafted by hand in the Guinean countryside. The music forms delightful, looping cross-rhythmic melodies that shift shapes as Famoro emphasizes different parts of the song. Griot music is composed for deep listening; the griot sculpts and improvises each song based on  the listeners present, in effect creating a dialogue that is meant to be both intellectually challenging and emotionally provocative.

On his father’s side, Famoro descends from the prestigious Dioubaté family of the Kankan region, in Guinea. On his mother’s side, he descends from the great Kouyaté family, the first jeli family named by the great emperor Soundiata Keita in 1235 CE. His maternal great-uncle, the late El Hajd Djeli Sory Kouyaté, was one of the world’s most renowned Manding balafonists and jeli to the former president Sekou Touré. With this pedigree, Famoro was one of the youngest to play in the national Ensemble Instrumental de Guinée. But quickly, he was swept up to play internationally, first in Abidjan, Côte d’Ivoire, followed by Australia, Fiji, Europe, Canada, and ultimately in the United States, where he makes his home.

Based in New York City for 23 years, Famoro mixes this profound and sacred West African musical tradition with some of the hottest musicians in New York today. His dance band, Kakande, plays regularly in Harlem at the Shrine World Music Café as well as in festivals throughout the city. Famoro has also played with world-famous Mory Kanté and Angelique Kidjo, and has performed in Carnegie Hall, Joe’s Pub, and museums and universities across the country.

The Famoro Dioubaté Band will include a special lineup at An Die Musik Live, including three additional Guinean artists, as well as longtime band members and musical extraordinaries Andy Algire and Sean Dixon. Together, this band will set the groove for an evening of splendor that is sure to inspire its listeners.