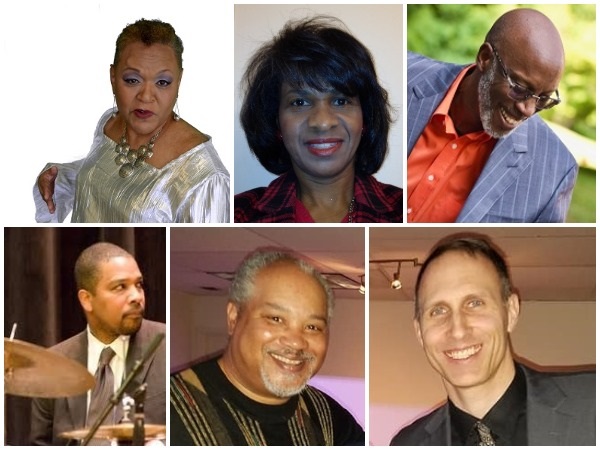 Marcia Baird Burris began her singing career in 2001 in the music lounge of a hotel in Libreville, Gabon at a conference she attended with her husband, the late Charles “Chuck” Burris, first African American mayor of the City of Stone Mountain, GA. Early in her career in New York, Marcia presented jazz and blues concert series and music-based benefits for local non-profits thus working with illustrious performers. Through her public relations work in New York and Atlanta, Marcia produced jazz, blues, theatrical and multicultural arts events.

Reggie Upshaw is a triple threat from New Jersey! His clear tenor vocals can take you from Brazil to the bowels of Louisiana Blues. He has the harmonic sensibility of Jon Hendricks and the creative musical moves of Al Jarreau. Reggie has performed from Boston to Denver under the tutelage of Rebecca Parris, Ronnie Wells and Denver’s Hazel Miller. He moved to the area after several years in the military, honing his talent in some of the area’s best establishments. He is a member of DC’s Cloudburst Vocal Jazz Group.

David Marsh is equally at home in Jazz, R&B, Blues, Latin, Caribbean, Brazilian, Classical, Funk, Reggae, Gospel and Persian as well as rock and pop. He is the bass player for "Cook, Dixon and Young" (formally Three Mo' Tenors). He performed on the group’s recent PBS special and CD. Cook, Dixon and Young performed at the LA Hollywood Bowl and Wolf Trap and with the prestigious LA Philharmonic Orchestra, Washington DC Opera, Chicago Symphony Orchestra and Cincinnati Pops Orchestra.

Pete Frassrand first learned piano from his mother, who was the minister of music at their church, and then from local players like Robert Redd, Charles Covington, and Tim Murphy. In 2000, he received a music education degree from Towson University and now shares jazz with young people as a music teacher. Since 2011 he has served as pianist for the Greater U Street Jazz Collective, which has appeared at the DC Jazz Festival, National Cherry Blossom Festival, Mid-Atlantic Jazz Festival, and the Congressional Black Caucus. He considers himself extremely lucky to work in an area with a rich musical and cultural history.