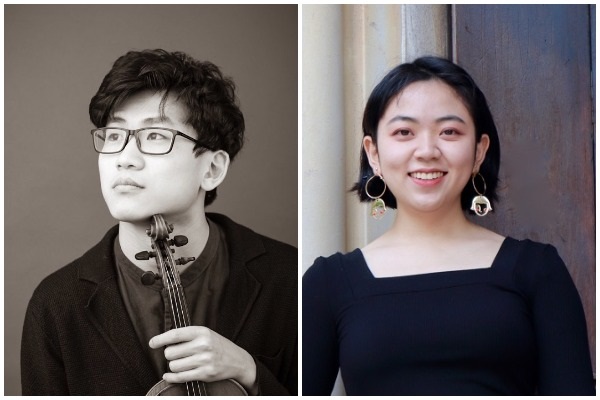 Recording of their performance on 6/1/21

Recent 1st Prize winner of the 2021 Marbury Violin Competition and the Rocky Mountain Strings Competition, award-winning Ran Huo is a passionate and energetic violinist. Despite his young age, Ran has shown astonishing depth and maturity in his music-making, performing a wide variety of repertoire spans from the early 17th century to the contemporary.

Born and raised in China, Ran began his violin studies at age 6. He was accepted to the Central Conservatory of Music in Beijing at age 12. There he studied with Hong Wang and Bing Yu. After years of intensive training, Ran decided to continue his path as a violinist in the US. Made his first debut with conductor JoAnn Falletta after winning the Jacqueline Avent Competition in 2016. Then he was accepted to the Interlochen Arts Academy and received his diploma in 2018. Ran is currently pursuing his Bachelor’s degree with a merit full scholarship at the Peabody Conservatory studying with Qing Li.

With over ten years of intensive professional training in piano performance and with her highly expressive performing style, Yilin Chi, an inspiring pianist from China, actively participates in various musical events and concert series as both a chamber musician and a solo artist.

Having performed a repertoire across all genres on the stages of Kilbourn hall, National Grand Theatre, Peabody Conservatory, the Central Conservatory of  China, and the Henan Art Center, Yilin has cultivated a special attachment with live performances and genuinely treasures every performing opportunity given to her. As a passionate chamber musician, Yilin has collaborated with members from the Peabody percussion studio, Peabody Symphony Orchestra, and numerous talented young artists.

In addition to her long-time involvement in the areas of solo and chamber performances, Yilin is also actively engaged in teaching- and accompanying related projects. She has participated in the open class series "From Bourque to  Modern Jazz" as a fellow member while studying with musician Wang Chun, one of the most prestigious professors in the Central Conservatory of China in  Beijing. Yilin has extensive experiences in accompanying violinists, violists,  cellists in solo concerts, students at auditions, and candidates across an array of ages in music competitions.

Yilin Chi, born in 2000, is raised in Beijing, China. She has studied with  ManChun Chen, Chun Wang, and Qifang Li before she graduated from the  Central Conservatory of China with a scholarship offered to only top musicians in the conservatory throughout her years there. She is currently pursuing a  Bachelor of Music degree in Piano Performance at Peabody Conservatory of the  Johns Hopkins University where she studies with Seth Knopp.