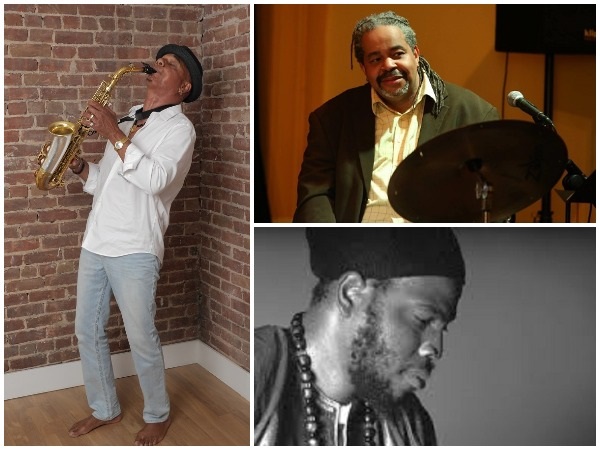 "We are in an extraordinary time period of planetary history. The current pandemic and the exposure of systemic racism via the innocent killing of an African-American man by police has created some very challenging and adverse conditions world-wide. I am extremely optimistic because for the first time the entire world is rising up to protest systemic racism in all its various forms and manifestations. Music is overwhelmingly vital as a healing force for the universe. I am quite fortunate to have bassist Jeff Reed and drummer Eric Kennedy as an integral part of the band as they are showcased on my CD Amour on Dot Time Records 2017. We will also perform selections from my latest CD The Rhythms Continue on JAJA Records 2019. All selections are dedicated to the universal movement of Black Lives Matter. I sincerely hope you can join us for a live stream performance. Please also support with your generous donations the wonderful work An Die Musik exhibits on behalf of a multitude of artists and musical genres." God Bless --T.K.Blue

Deeply indebted to organizations such as Jazzmobile, Jazz-interactions, Henry Street Settlement, and the Muse for his own jazz studies, T.K. has remained committed to music education from pre-K to the university level. He has taught at Suffolk Community College, Montclair State University, and Long Island University where he was also the Director of Jazz
Studies from 2007 to 2014. In 2007, T.K was commissioned by NYSCA and Transart Inc. to compose a work dedicated to the early African American presence in the Hudson Valley area of upstate New York. He released Follow the North Star, a suite based on the life of Solomon Northup and his memoir, Twelve Years a Slave. Having lived nearly 10 years in Paris, T.K. was hired by the USIA and his band embarked on three State Department Tours of Africa. He currently resides in Jersey City, NJ and continues to perform, teach privately, and engage in clinics and adjudication.

T.K.’s musical journey unfolds into 2019 with a new recording project dedicated to two legendary giants: Dr. Randy Weston and trombonist, composer, and arranger Melba Liston. T.K. recorded his 12th CD as a leader, which is a suite entitled The Rhythms Continue on JAJA Records. In addition, he was honored to be on a panel for the Jazz Congress at Lincoln Center, which discussed the impact of Dr. Weston’s musical and cultural legacy. T.K. performed and recorded in Paris, France during March and April. He wrote arrangements for vocalist Sarah Thorpe and he will be featured on her new CD entitled Deep Blue Love on Dot Time Records.

In June, Blue performed several high profile tributes for Dr. Weston at the Brooklyn Restoration Plaza, Highlights in Jazz at Tribeca, and the Kennedy Center as part of the International Washington DC Jazz Festival In July and August, T.K. presented a new project called The Motherland Connections for Jazzmobile’s Summer Concert Series. Blue spent the month of September in Senegal, West Africa, and performed at the Jazz Club La Cave du Hotel Djoloff in Dakar. Blue will showcase his new CD Oct 31st at Minton’s Playhouse in Harlem as well as upcoming performances in Washington DC, Philadelphia, and NYC.

The documentary film company, "While We Are Still Here" produced a short film entitled "In The Face Of What We Remember: Oral Histories of 409 and 555 Edgecombe Avenue." The film features original music by T.K.Blue.