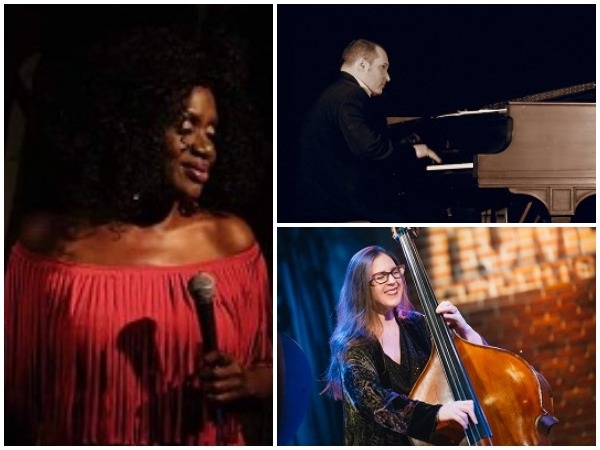 “I never thought I'd hear a singer with the range, musicality and command of tone and timbre that was Sarah at her best, but now I have.”
- JazzTimes
“You can’t underestimate the transformation of what seems like an ordinary song when an interpreter like Sharón Clark tears it apart and peers inside.”
- Stephen Holden, New York Times

An die Musik Live, Cafe Mezzanotte and Jazz Beyond Borders are teaming up
to bring you the jazz concert of the season!

Looking for holiday cheer? Have the urge to travel? This jazz concert is for you!  Washington, D.C. First Lady of Jazz Sharón Clark, celebrated pianist Chris Grasso, and leading East Coast bassist Amy Shookare known for their heart and soul - and they bring along enough terrific jazz chops to satisfy any listener. These three internationally respected artists will entertain with music of the season and tunes invoking images of the world travel they have become accustomed to on their international tours.

Ease into the holidays with Vince Guaraldi classic "Christmas Time Is Here” and the delightfully enduring “Let it Snow” with lyrics by Sammy and music by Jule Styne. Recall past experiences shared with friends and family and the thrill of travel. They’ll share beloved Vernon Duke tunes "Autumn in New York”  and “April in Paris,” Jimmy Webb’s evocative “By the Time I Get to Phoenix” and Brubeck’s “Travelin’ Blues.”

The Sharón Clark Trio
Washington, D.C. standout Sharón Clark has brought festival and concert audiences to their feet across the U.S. and Europe and in Asia and she is a cherished figure in the Nation’s Capital. Her most recent release, Do it Again — My Tribute to Shirley Horn, is on its third printing, and she grabs top honors wherever she goes. Says All About Jazz,  "Sharón Clark belongs on the playlist of anyone who listens to Ella Fitzgerald, Billie Holiday or Sarah Vaughan, she is that good!”

Pianist Chris Grasso is known for his work with vocalists and has performed with countless jazz greats. He and Sharón Clark have appeared at major festivals and U.S. venues such as Jazz at Lincoln Center, the Kennedy Center, Blues Alley, Bohemian Caverns, the Iridium, the Metropolitan Room, and the Music Center at Strathmore. He studied classical piano at Peabody Conservatory and the University of Michigan where he earned a bachelor of musical arts degree and won the university's concerto competition. He placed third in the National Chopin Competition and has appeared as a concerto soloist with the University of Michigan Philharmonic and the Syracuse Symphony.

Premier performing and recording artist Amy Shook is a multi-instrumentalist (acoustic bass, electric bass, violin, viola, and cello). She co-leads the all-women powerhouse 3D Jazz Trio with drummer Sherrie Maricle and pianist Jackie Warren. Their work with Maurice Hines is Tappin’ Thru Life was described by the New York Times as “blistering hot.” Shook performs widely in several groups and as a guest and collaborator with numerous bands and orchestras in multiple genres. She holds two bachelor's degrees (performance and composition) and a master's degree (performance) from the University of Idaho.

A few in-person tickets are available for this concert. Please email andiemusiklive@gmail.com for details, if interested.