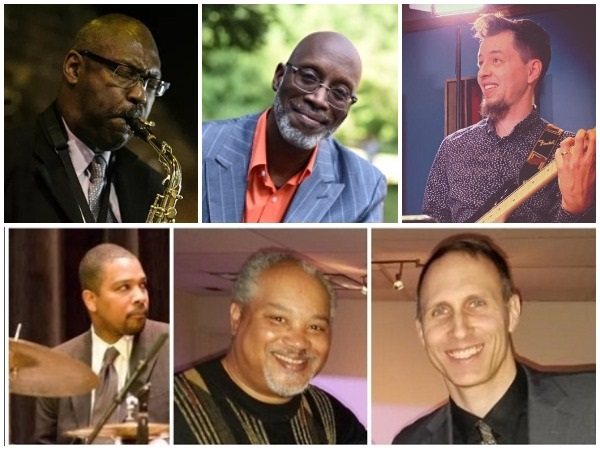 Reggie Upshaw is a triple threat from the Boston Area. He can caress you with a ballad, or scat and swing your socks off. His clear tenor vocals can take you from Brazil to the bowels of Louisiana Blues. He has the harmonic sensibility of Jon Hendricks and has the creative musical moves of Al Jarreau. He’s thankful to USAF talent competitions, Denver’s late night jam sessions, and the Hazel Miller Band for igniting his continuing passion for jazz. After several years in the military, he moved to the area continuing “jazz studies”; more late nights, and excellent teachers in mentor Rebecca Parris, Ronnie Wells, and Miles Griffith. He is a member of the DC’s Cloudburst Vocal Jazz Group.

Terry Koger, a native of Trenton, NJ began musical training at an early age on piano and later alto sax. He was mentored by significant scholars such as Dr. Samuel A. Floyd, Dr. Eileen Southern, and Dr. Dominique Rene’ deLerma. He has published works in the Black Music Research Journal and Black Perspective in Music. He has worked with Vattel Cherry’s Soulstation, The Eubie Blake Big Band, The Deep Water Jazz Ensemble and the Benny Russell Big Band.

David W. Marsh III is a graduate of the Duke Ellington School for the Performing Arts in DC. He is equally at home in Jazz, R&B, Blues, Latin, Caribbean, Brazilian, Classical, Funk, Reggae, Gospel and Persian as well as rock and pop. He has been on the bill with Dizzy Gillespie, David Sanborn, Ronnie Laws, Sarah Vaughan, Jerry Butler, Yolanda Adams, Ritchie Cole, Pieces of a Dream, Ahmad Jamal, Three Irish Tenors, and Placido Domingo, and many notable others.

Pete Frassrand was born in Detroit and learned piano from his mother. In 1995 he moved to DC to study with players like Robert Redd, Charles Covington and Tim Murphy. In 2000, he earned a music education degree from Towson University and now shares jazz with young people as a music teacher. Since 2011 he has been the pianist for the Greater U Street Jazz Collective.