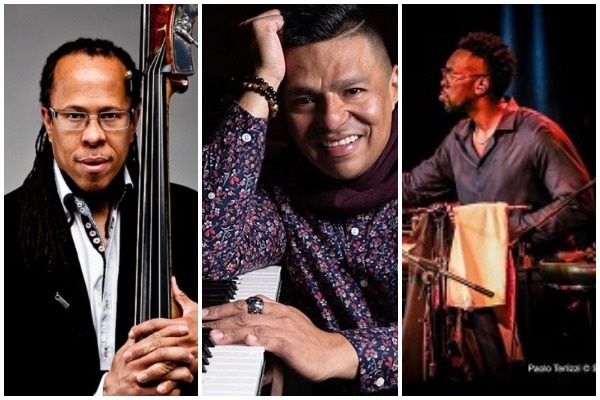 A recording of their live performance on March 5, 2021

Benito’s acclaimed album, Passion Reverence Transcendence Featuring: (Essiet Okon Essiet and Gerry Gibbs), reveals a very personal body of work as he emerges as a leader and an accomplished improviser. Recently, Benito received more critical attention for his work on a great tribute to Music Legend "McCoy Tyner" also received two Grammy nominations with The Kenny Garrett Quartet, The albums ‘Seeds from the Underground and Pushing The World Away'.

After almost seven years of touring with Kenny Garrett, Benito has added numerous festivals and international jazz club dates to his credit. In 2019 he joined legendary saxophonist Pharoah Sanders as a pianist and musical director. He also shared the stage with an impressive list of top performers.

Michael Bowie is an internationally recognized musician, performing on both the electric and contrabass. With roots in the Washington D.C. jazz and gospel community, he was a recipient of the National Endowment of the Arts Award in Jazz Studies and trained with Betty Carter and Keter Betts. Soon after, Michael signed with Verve Records as an original member of "The Harper Brothers". He went on to perform, record and tour with Abdulla Ibrahim, Michel Pettruciani, including the Grammy Award-winning "Look What I Got" with Betty Carter.

Michael is deeply involved in developing children's music enrichment. He is a certified teacher in Washington D.C.'s Public School system where he directs the Fillmore Elementary Arts School's music department.His non-profit organization The Music Teaching Project provides DC youth with the opportunity to take music lessons for free after school.

Baltimore native Lee Pearson is one of the most vibrant and electrifying drummers of today. From Broadway to Jazz, Hip-Hop and R&B, he maintains the classic vocabulary of percussion.

Pearson has toured and performed with a huge array of bands and orchestras.  He also participated in a world tour with Savion Glover’s four-time Tony Award-winning Broadway show, Bring in ‘Da Noise, Bring in ‘Da Funk.