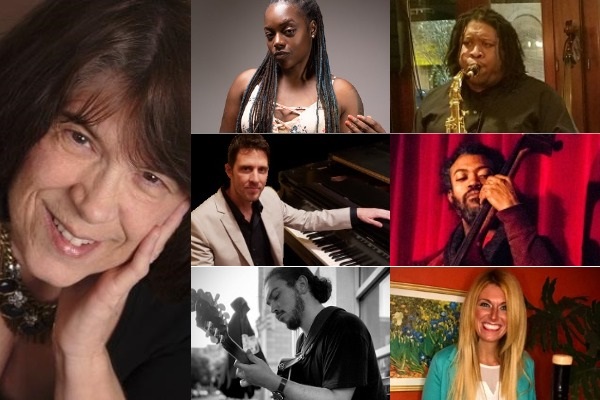 FORWARD MOTION is a group of unique multi-instrumentalists and composers, brought together on one stage for the first time by one of Baltimore’s most prominent jazz advocates, vocalist Liz Fixsen. Liz, Eric, and Matthew led two jam sessions in Baltimore a couple of years back, and then when the pandemic hit, the other four joined them in periodic house creativity sessions to explore their repertoire. This show highlights their amazing original compositions and musical talents. The tunes vary in style and groove, from Liz's romantic bossa nova, "Close to You," to Sheritta's funky scat vocal, "Skidoobye," James's quirky tune "Sleazin," and Matt's and Eric's evocative "Journey to Ixtlan." Showcasing their compositional talents and their performance chops, the band will provide an entertaining hour of jazz.

Liz Fixsen (vocals) has been a part of the Baltimore jazz scene for many years as a keyboardist and vocalist, participating in jazz sessions at many venues and playing piano at numerous private functions. She has studied voice with Baltimore vocalists Felicia Carter and Irene Jalenti. Her original composition “Ballad for Bill'' was included in the BJA’s second compilation album, Baltimore Jazzscapes II

Eric Worthy (tenor sax) studied saxophone with Derrick Michaels and Chad Lefkowitz-Brown. He has played a range of venues and events, often with his brothers, pianist Zachary Worthy and saxophonist Aaron Worthy. In 2016 he toured New York the band “Tight Like That.” He is a mainstay at several Baltimore-area jam sessions.

Matthew George (piano) is a multi-instrumentalist who grew up playing classical piano. In college, he studied jazz piano with Gary Chapman and classical cello with New York Philharmonic conductor Michael Adelson. In 2007 he moved to Seville, Spain to study flamenco guitar. After coming to Baltimore in 2014, he played with many local groups. He teaches at All About Music in Parkville.

James Byrne (guitar) originated in New York. A graduate of West Chester University with a degree in music performance, he studied with Grammy Award-winning guitarist David Cullen and others such as Marc Jacoby, John Ragonese and John Swana. James is the guitarist for the West Chester University’s Honors Trio and has performed throughout the country in all types of ensembles and genres. He has resided in Baltimore since 2019. James teaches people of all ages and enjoys arranging and transcribing for his performing groups,putting his spin on popular and classic songs.

Jeron White (bass) has years of experience in the jazz/avant garde scene in the Washington-Baltimore and NYC areas. He leads his own group, Polarity, and is featured on several recordings. His discography includes Jamal Moore’s "Organix Trio Ancestral Communion" four-part series, Theljon Allen’s "Prospective,” and Dimitri Nassar’s "Crescent Piano.” He often plays with trumpeters Theljohn Allen and Brandon Woody.

Lauren Silinsky (percussion), a native of Chicago, received vocal training through the Jacobs School of Music at Indiana University, Bloomington. After moving to Madrid in 2007, she began to hone her vocal skills in Spanish and to incorporate flamenco dance into her repertoire. Upon returning to Chicago, she performed with Latin Jazz group “Grupo Cha-Cha”, and the Spanish rock group “Vagando.” A rare connective tissue disease impaired her ability to sing and to play some instruments, however physical therapy enabled her to spend four years performing with the Daza Dance Studio in Atlanta.