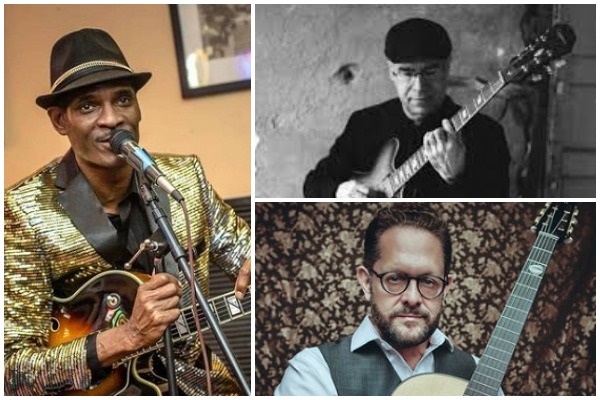 This is a recording of their live performance on our stage on March 4, 2021

The first-time collaboration between these three artists, in a concept borrowed from earlier times when guitar greats Herb Ellis, Grant Green, Barney Kessell came together to play standards. This time, three guitarists with completely different styles and approaches will come together to play music from multiple genres and styles -- songs spanning from Wes Montgomery to Stevie Wonder.

“Music is a passion of mine. Picking up the guitar and just letting your mind be free is something that I enjoy,” Rodney Kelley said. “When I got into this music, it was something I truly enjoyed doing. I love to entertain, but more importantly, I want to show people HOW to entertain, how to be a professional, and when given the opportunity, be able to mentor or share my experiences and teach others who also want to be in this business.”

“I just want people to know, there are good quality shows and artists who truly do care about how they look, how they sound, and how they perform. I just want to set the example, educate and do my thing, the only way I know how,” said Kelley.

In 2012, after years of performing mostly Brazilian and Latin influenced original music, guitarist Michael Joseph Harris began studying and playing the music of legendary guitarist Django Reinhardt which led to the creation of The Hot Club of Baltimore later that same year. After a surge of Django-inspired composing in 2013, Harris formed the band Ultrafaux in 2014 to perform his original songs in the style of Gypsy Jazz.

Baltimore Style Magazine named Michael one of the city’s top musicians and he was featured in a full-spread article in The Baltimore Sun newspaper. He has quickly become one of the most prolific composers of Gypsy Jazz-inspired songs in the world, releasing eight full-length Reinhardt-inspired recordings by both groups since 2014. Michael’s most recent album Tangent introduces a larger Ultrafaux ensemble, adding top guest artists from the jazz, folk, and bluegrass scene

Michael Raitzyk was born and raised in Baltimore. By the time he was in high school, his family moved to Portland, Oregon, where he attended Thomas Jefferson High, a performing arts school that specialized in jazz studies. In 1982 he moved back to Baltimore and finished his jazz performance studies at Towson University. There he played in Hank Levy’s band, who is best known as a big band composer for Stan Kenton and the Don Ellis Orchestra.

Since 1985, Raitzyk has been active on the local music scene in a wide range of music genres, including his band, Charm City Klezmer. Raitzyk has released three CD’ as a leader: Blues For Jake (2003), Live @ Café Hon (2006) & Michael Raitzyk’s Organic Trio (2011). Raitzyk’s guitar style is a mix of traditional & modern jazz.