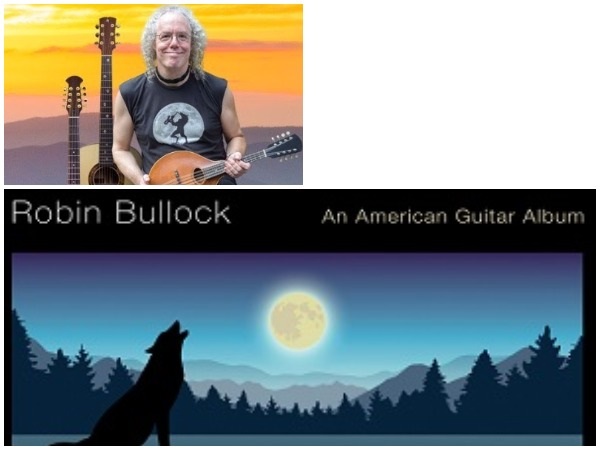 INDIE Award-winning guitarist Robin Bullock returns to An die Musik Live! to celebrate his twelfth solo CD (or seventeenth, counting collaborations), a recording that's at once a departure and a homecoming. After many years of exploring Celtic musical traditions – earning him the sobriquet "Celtic guitar god" from Baltimore City Paper – and adapting Bach Cello Suites for mandolin along the way, Robin returns to his roots now for a CD of classic American folk songs interpreted on (mostly) solo guitar.

Inspired by a suggestion from folk legend Tom Paxton while Robin was touring as his sideman, the straightforwardly-titled An American Guitar Album includes Robin's deeply personal take on such evergreens as "The Streets of Laredo," "Oh Susanna," "My Home's Across the Blue Ridge Mountains," "Fox Went a-Hunting on a Chilly Night," and many other beloved American songs, as well as new re-recordings of Robin's original "Lost Hollow Lament" and his much-requested solo guitar version of "Shenandoah." In a time of change and uncertainty in America, An American Guitar Album reminds us of our higher spirit and challenges us to remember what we can be.

Robin Bullock is no stranger to An die Musik Live! or Maryland audiences. A founding member of Baltimore's venerable world-folk trio Helicon and a winner of multiple Washington Area Music Association WAMMIE Awards as a solo artist, Robin has also been hailed as “one of the best folk instrumentalists in the business” by Sing Out! Magazine, ranked by DigitalDreamDoor.com as one of the "100 Greatest Acoustic Guitarists,” and a recipient of Editor's Pick and Player’s Choice Awards from Acoustic Guitar Magazine. Now a resident of Black Mountain, North Carolina, Robin is delighted to visit his longtime hometown to celebrate his new CD and to share the event online for anyone anywhere in the world.

An American Guitar Album will be available on August 1st in download and physical CD formats from www.robinbullock.bandcamp.com.