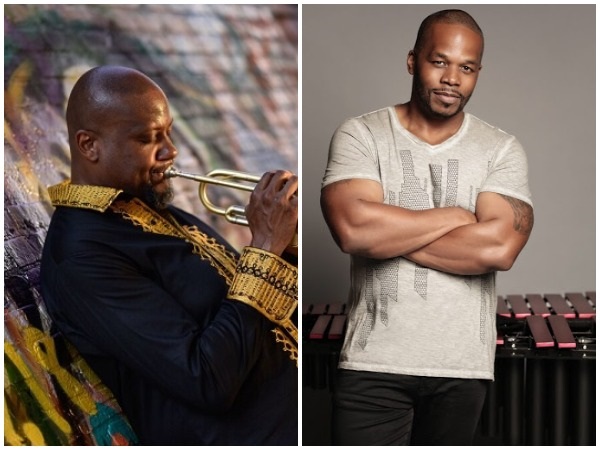 Mother's Day is a celebration of motherhood, togetherness and family! That could be challenging during these times. However, trumpeter Sean Jones and Warren Wolf have come up with a solution to help make your Mother's Day a special one, in spite of circumstances.

Join this dynamic duo for a special Mother's Day celebration as they share song, culinary treats by Sean Jones and Sotto Sopra, and conversation about music at large.

Let's celebrate our mothers, good times and family on this special day!

Music and spirituality are fully intertwined in the artistic vision of trumpeter, bandleader, composer, educator and activist Sean Jones. He is a musical chameleon, comfortable in any musical setting, no matter the role or the genre.

Sean turned a 6-month stint with the Jazz at Lincoln Center Orchestra into a permanent position with Wynton Marsalis from 2004 to 2010. From 2015-2018, Jones was a member of the SFJAZZ Collective. During that time, he managed to keep a core group of talented musicians together under his leadership, forming the foundation for his groups that have produced and released eight recordings on the Mack Avenue Records, the latest is his 2017 release Sean Jones: Live from the Jazz Bistro.

An internationally recognized educator, he was recently named the Richard and Elizabeth Case Chair of Jazz at the Peabody Institute. Previously, he chaired the Brass Department Berklee College of Music in Boston.

Warren Wolf is a multi-instrumentalist from Baltimore. From the age of three, he has been trained on the vibraphone/marimba, drums and piano. Under the guidance of his father Warren Wolf Sr., he has a deep background in all genres of music.

Warren attended Peabody Preparatory for eight years, studying classical music with former BSO member Leo LePage. In high school at Baltimore School for the Arts, he studied with BSO member John Locke. At Berklee College of Music, he studied with Carribean jazz vibraphonist Dave Samuels and vibist Ed Saindon. Warren has performed with a who's who of the musical world. He has several recordings as a leader and recently signed with the Mack Ave recording label.