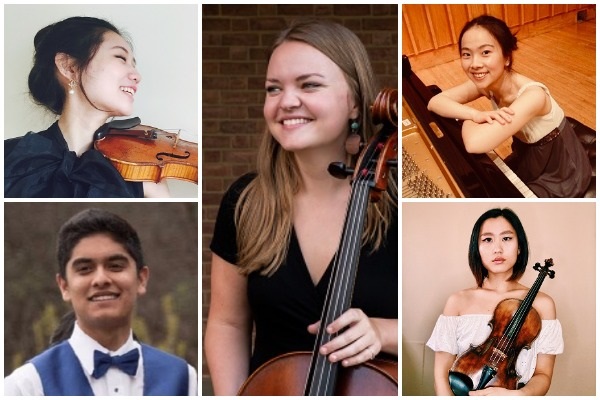 “Nikolai Kapustin (1937-2020) was a Russian composer whose work is known for his unique blend of jazz style with classical form and instrumentation. As a pianist who trained at the Moscow Conservatory, Kapustin is known for his virtuosic piano writing, however this concert will feature his lesser known chamber works for cello and piano and for string quartet. While these works do not include any improvisation, they often remind the listener of the style and spirit of jazz combos playing standards.”

Recording of their performance on 5/22/21

Long Island native Emily Doveala started formal cello training at Mannes Prep, studying with Dorothy Lawson of the ETHEL Quartet. She received a Bachelor of Music in Cello Performance at Ithaca College and holds a Master’s Degree in Cello Performance from Stony Brook University, where she studied with British cellist Colin Carr. In 2019, Emily began her Doctor of Musical Arts degree at the University of Maryland, studying with Dr. Eric Kutz. She joined the 2019 tour of cutting-edge chamber music group Cordis, playing five-string electric cello. She was an undergraduate chamber music coach at Stony Brook University and teaches and coaches undergraduates at the University of Maryland.

Violinist Yuna Kim was born in Seoul, Korea. She studied violin performance at Yewon Arts school and Seoul Arts high school. Kim moved to the United States to study at the New England Conservatory of Music with James Buswell and Nicholas Kitchen. After graduating with a bachelor degree in violin performance, she moved to Maryland and continues her studies with David Salness at University of Maryland School of Music. Kim has performed as a soloist with orchestras such as Janacek Philharmonic Orchestra and Seoul Symphony Orchestra. She also performed with John Gibbons in his baroque music recital at New England Conservatory.

Born in Qingdao, Tong Li studied at the Cleveland Institute of Music’s Preparatory Division. She served as Assistant Principal of Second Violins for Cleveland Orchestra Youth Orchestra and Eastman Philharmonia, Brevard Music Center Orchestra Assistant Concertmaster, and Principal Second of the Brevard Sinfonia. She loves performing contemporary music and was part of Eastman Musica Nova. Tong regularly plays with Symphoria (formerly the Syracuse Symphony) and is an Associate Member of the Chicago Civic Orchestra. She is a mentor to the Maryland Classical Youth Orchestra and worked with ROCmusic for inner-city Rochester students. Tong is the Chamber Music Graduate Assistant at the University of Maryland, working towards her Masters of Music with Dr. James Stern.

Violist Rohan Joshi attended the Rochester Conservatory of Music and graduated with honors while studying with former principal violist of the Serbian National Opera, Ned Djordjevic. He attended Boston University, where he graduated in 2020 with both a BM in Viola Performance while studying with Prof. Daniel Dona, and a concurrent BA in Political Science. Rohan was awarded fellowships to the National Orchestral Institute and the Scotia Festival of Music. He has performed with the Detroit Symphony Orchestra, was a member of the New England Philharmonic, and was a founding member of the Hugo Quartet. Currently, Rohan is pursuing a MM in Viola Performance with Professor Katherine Murdock, at the University of Maryland, College Park.