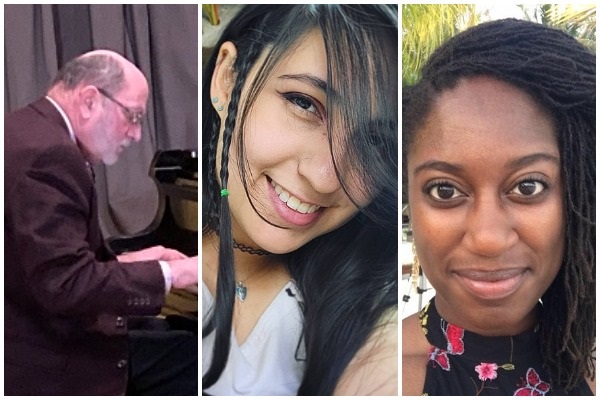 Recording of their performance on 5/8//21

Robert Hitz is a composer, pianist and master teacher. He is the quintessential modern artist -- his music spans genres and influences, and is open to all great musical ideas. Although classically trained at the Peabody Institute and Syracuse University, Robert began playing and composing through improvisation.

“Passion permeates his music -- powerful” (L. Billingsly, RSI). Whether in live concert or his recordings, Robert is an engaging and lyrical performer. He has recorded 4 solo CDs and 3 collaborative CDs, and will soon record a collection of new compositions. Robert has received Meet the Composer and ASCAP grants. He is a member of ASCAP, NARAS, and serves on the executive committee of the Society of Peabody Alumni (SPA).

Felicia Harrington is a pianist, composer, accompanist, and music educator who strives to exemplify the most fragile human experiences using only 88 keys. Her music has been praised as “courageous, overwhelming, rhythmic, intense, fiery, and powerful.” She considers music as an extraordinary means to express a range of personal emotions from daily life…triumph, defeat, love, suffering, tranquility, curiosity, loneliness, chaos, joy,  beauty, and gratitude…to name a few. Felicia encourages her audience to be vulnerable enough to embrace each of these experiences through music. Beautifully Blemished, Felicia’s first solo piano EP was released in 2016.

Ora Chaya Brock's passion and dream in life is to ignite inspiration in others to follow what they believe in. Her music is nostalgic, passionate, thought-provoking and melodic. "Revelation" was a complete instrumental album released in 2013, "Believe" is an acoustic album, these are both available on Spotify as well as other originals.