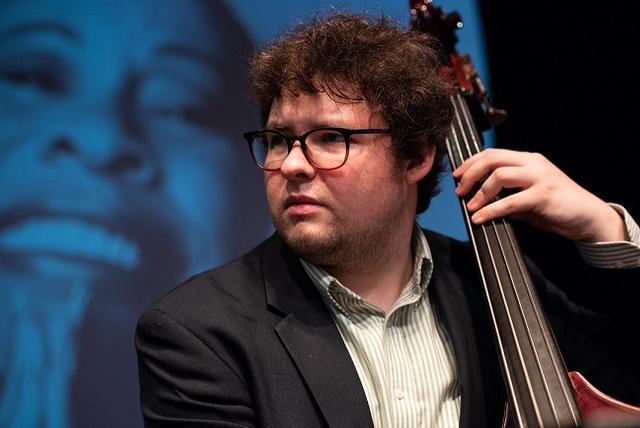 Stephen Arnold is a bassist, composer, bandleader, and educator living in Washington, DC. Known for his open ears, earnest expression, and unique musical voice, he has quickly become one of the region’s most in-demand upright and electric bassists. Hailing from Greenfield, MA, Stephen’s earliest connection jazz comes from listening to NEPR’s Jazz à la Mode radio program, which his father would put on every night before bed. (Dizzy Gillespie’s “Swing Low, Sweet Cadillac” was an early favorite song.) He began studying piano at a young age at Artspace in Greenfield and learning music from movies and musicals such as West Side Story and The Sound of Music. In 10th grade at the Academy at Charlemont, he began to learn rock, folk, blues, and soul music under the tutelage of the school’s music director Dave Chalfant, his first bass teacher.

Stephen began seriously studying jazz at the George Washington University, where he was privileged to have studied with Herman Burney Jr., who gave him his first formal lessons on the upright bass and continues to be an important teacher, role model, and mentor. After graduating in 2017, he dove headfirst into DC’s vibrant and diverse music scene, playing straight-ahead jazz, funk, Brazilian, rock, and fusion. In 2018 he was selected for Betty Carter’s Jazz Ahead program at the Kennedy Center.

As a sideman, Stephen performs regularly with Donvonte’ McCoy, Alison Crockett, Samuel Prather’s Groove Orchestra, Sharon Clark, George V. Johnson Jr., Aaron Myers, Sarah Hughes, Keith Butler Jr., and Simone Baron’s Arco Belo. In addition to leading his own groups, Stephen is a member of and featured on studio recordings by not-jazz band ¡FIASCO! and adventure-music ensemble The New World. Regardless of the setting, Arnold brings inspired energy and emotional passion to the music he plays.

Stephen leads and performs his original compositions in Sea Change. The group’s upcoming debut release features Arnold on upright bass leading a sextet with Brian Settles on tenor saxophone, Simone Baron on accordion, Aleks Izotov on piano, Nelson Dougherty on guitar, and Keith Butler Jr. on drums, as well as a guest appearance from Sarah Hughes on soprano saxophone.