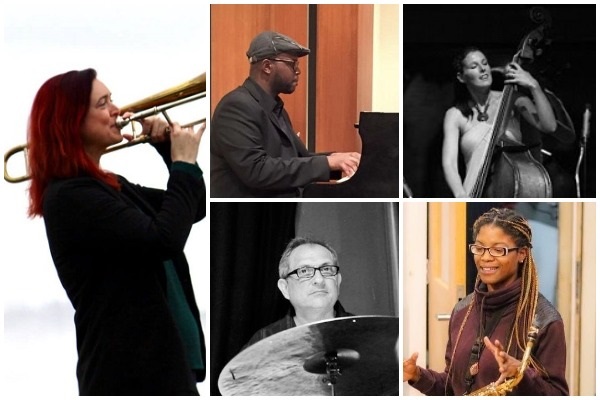 Recording of their performance on 4/25/21

Shannon Gunn is a jazz trombonist from the Washington DC area who actively uses her music for social justice causes. In 2015 she co-founded, with local non-profit CapitalBop, the Jazz and Freedom Festival, which has in turn raised funds and support for non-profits such as Empower DC, Black Lives Matter DMV, WPFW-FM (DC’s Jazz and Justice radio station), the Capitol Hill Jazz Foundation, and ICE Out Of DC. She is volunteer Program Manager of Jazz4Justice, a non-profit based out of Fairfax, VA, which creates collaborative partnerships between the legal community, the business community, the music community, and Universities to raise funds for Legal Aid (pro bono civil case legal assistance for low income individuals) and music scholarships. In 2019, she started Jazz Girls Day DC, in collaboration with the Washington Women in Jazz Festival, to empower young women to pursue jazz without boundaries from gender.

Hailed by the Washington City Paper as “D.C.’s Best Trombonist 2015” and the DistrictNow Blog as “Best Trombonist 2017,” DC based Shannon Gunn is known for her exceptional tone and her grandiose project-du-jour. She released “Gunn’s Ablazin,” her freshman solo project, in August 2019 to critical acclaim, which included her quintet and her trio. Her organ trio, Firebird, was named “DC’s Best Small Ensemble 2016” by the Washington City Paper. She also runs DC’s premiere all-women jazz orchestra, “Shannon Gunn and the Bullettes,” including successful performances at the DC Jazz Festival, the Kennedy Center, Castleton Theatre House, Washington Women in Jazz Festival, Takoma Park Jazz Festival, Jazz on Jackson Place, Westminster Jazz Night, Nomadic Jazz, Great Gatsby Inaugural Ball, Goethe Institute, National Jazz Workshop, Gallery O on H, Arts on the Avenue, Bohemian Caverns, and Dardanella. She has self produced six albums (five Bullettes, and one solo album) and mixes and masters all of her own music. She earned her Masters of Music in Jazz Studies from George Mason University in Fairfax, Virginia and also attended James Madison University and Michigan State University for her music studies. She produced “The JazzCast,” (2013 – 2015), a podcast dedicated to curated listening sessions with jazz musicians. She self-published a textbook for high school students, Introduction to the Recording Arts, available on demand and through Kindle on Amazon. In addition to the ensembles listed above, Shannon Gunn has performed with the Metropolitan Jazz Orchestra, Reunion Music Society, American Festival Pops Orchestra, Manassas Chorale, at various TV stations such as DCTV, CBS Morning Show (local) in Richmond, WJLA ABC in DC as part of the Gatsby Ball promo, and has subbed in with the DIVA! Jazz Orchestra for Maurice Hines’ “Tappin Thru’ Life” as well as subbed on tour with Monika Herzig. She resides in Virginia with her husband, Timothy.