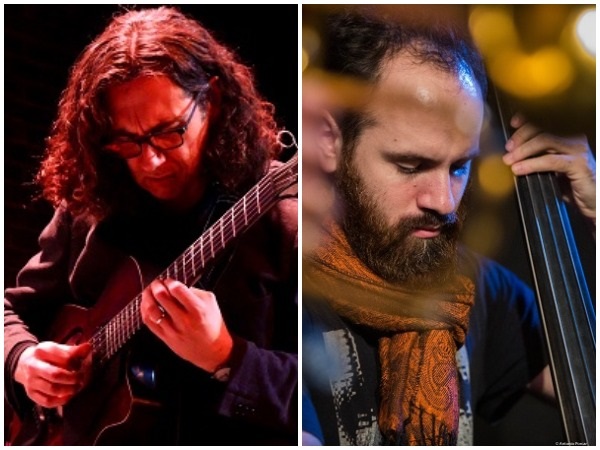 Guitarist Oscar Peñas - Bassist Manel Fortià, a minimalistic duet setting that creates a sensitive and intimate collaboration between two friends in a never-ending conversation of listening to each other. The Oscar and Manel exchange is "spontaneous creativity."

Barcelona native, Oscar Peñas (www.oscarpenas.com won the attention of the press and audiences for his innovative work described as “transnational cool.” Alana Harper, WNYC, and Mark Ruffin, from SiriusXM, Real Jazz channel wrote “Spanish guitarist Oscar Peñas has attracted a wide variety of fans through his unique combination of classical, Spanish folk music and Brazilian grooves over an American jazz base.

Peñas early steps followed the bebop, nevertheless after a very thoughtful conversation with pianist Cecil Taylor, who advised Oscar to follow his passion and heritage paths, he changed the course of his career focusing on crossing genres of jazz, Iberian, Brazilian, Argentinean and classical music. Having spent formative years in Boston at the NEC and previously Berklee, he is now a resident of Harlem, NY.

Oscar’s innovative work sometimes is an experimental exploration of genres, he creates extraordinary musical experiences that enrich lives and empower individuals through collaboration, innovation and a passion for artistic excellence. His intuition and ear drive him into an amalgam of melodies that aims for the unexpected and merge multiple styles of music that do not cohere to a single signature style. Since he is an independent artist, it is astonishing to see his ability to access the best venues in the USA to showcase his work and play with renowned jazz masters.  The singularity of his work is his unique way of blending two genres that seem antagonistic, like jazz and classical. Also, the usage of non-traditional instrumentation in either style outlines the sounds of the history that inspires the suite.

Manel Fortia (www.manelfortia.com) is a bassist based between Barcelona and New York with a long career as a performer and improviser in jazz that has led him to play with some Grammy Awarded and Nominated musicians such as Dave Liebman, Chris Cheek, Arturo O’Farrill, Chano Dominguez, Eliot Zigmund, Bill McHenry… among many others, and played in some of the most important International Jazz Festivals.

He has also led his own projects and has been recognized with multiple awards. His approach of extended techniques at double bass and his creative experimentation combine with a huge melodic sense and deep sound has converted him into one of the most unique and original bassists of the new generation.