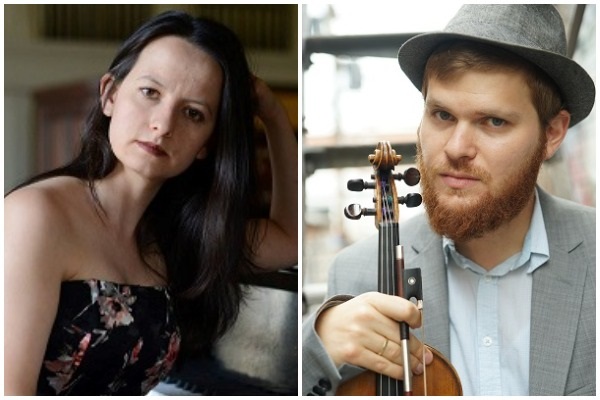 Check out the recording of their live-streamed concert from our stage on Feb. 14, 2021.

As an active soloist and a sought-after chamber musician, pianist Teodora Adzharova frequently collaborates with musicians from the Peabody Institute and Baltimore Symphony Orchestra. She has had numerous appearances at the Sundays at Three Concert Series, Summer Chamber Music at Roland Park, Montpelier Arts Center, area colleges, and the Hedgelawn Series. Teodora’s recordings have been broadcast on APM’s Performance Today.

In 2015 she inaugurated the Peabody-UMBC Partnership in Innovation with cellist Mauricio Ray Gallego. Teodora is an avid proponent of new music and has often appeared with the Now Hear This Ensemble led by Courtney Orlando, performing works by groundbreaking composers such as Reich, Haas, and Mincek. In 2016 she was chosen as the pianist for the Naxos recording of Pulitzer Prize-winner Kevin Puts’s CD, under the direction of Marin Alsop. Teodora is also Co-founder and Artistic Director of the Annunciation Cathedral Concert Series in Baltimore.

She is a faculty member at the Peabody Conservatory, Peabody Preparatory, and the Community College of Baltimore County. Her performing history encompasses the stages of multiple countries and accolades at national and international competitions. She holds performance degrees from the Peabody Institute (MM, 2011; Performance  Diploma, 2013; DMA, 2020) where she studied with renowned pedagogue Ellen Mack.

Committed to musical performance in different forms, Grinberg has performed as soloist, concertmaster and chamber musician in halls around the world.Grinberg recorded a Piano Quintet by Leshnoff with members of the Baltimore Symphony on Naxos in 2017.

For eight years he toured and performed with the Arab-Jewish Youth Orchestra as soloist and concertmaster in Israel and Europe. The experience of seeing first hand how the music acted as a healing power in areas of harsh conflict, between both musicians and audiences, has affected him deeply as a musician and as a human being, devoting himself to using music to mend hearts and make the world a better place.