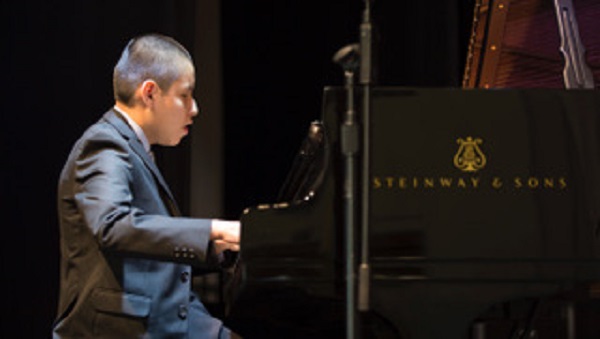 José André will be joined by amazing musicians, featuring Kelton Norris on drums and Herman Burney on bass.

Fifteen year-old José André is a Bolivian jazz pianist who taught himself to play piano. His playful and inspired compositions bridge jazz, Blues, bossa nova, and world music. He is a blind musician who flavors his tunes with Latin rhythms and jazz harmonies. Despite his very young age he has already delighted audiences from prestigious festivals and concert halls across the Americas.

He made his first international appearance in Sao Paulo, Brazil and at the age of nine, he performed at The John F. Kennedy Center in Washington, DC. He also has had appearances in Italy, Malaysia, Finland and other countries worldwide. In the Washington area, he has performed at the DC Jazz Festival, Mid Atlantic Jazz Festival, and other venues. He has shared stage with Marcus Miller, Jason Moran and Renee Fleming, among others.

José Andre is one of five winners of the 2019 VSA International Young Soloists Competition, a Jean Kennedy Smith Arts and Disability Program of the John F. Kennedy Center for the Performing Arts, that recognizes talented, emerging artists from all over the world.

At the second annual Columbia Lighthouse for the Blind “Lighting the Way” Gala, José André was one of the distinguished awardees recognize for his achievements and talent.