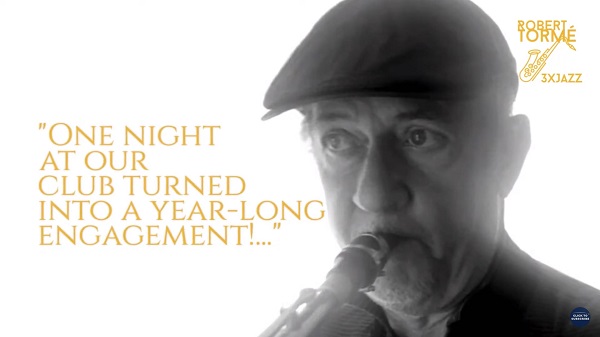 Recording of their performance on 9/17/21

This group of outstanding musicians is comprised of multiple Grammy Award nomination and MAC Award recipients.

Robert Tormé  was born to a musical family with deep roots in the music industry, as well as in the New Orleans music scene. He and his his group, 3xJazz, continue in this tradition. An accomplished Saxophonist/Singer, Robert was selected as one of the best alto sax players at All State, while attending Austin Peay State University in Clarksville, TN. He performed as a member of Dr. Aaron Schmidt's famed Jazz Collegians, while studying at Berklee School of Music and the University of Central Florida. Not long after, Robert began a career as a playing musician, becoming one of the most sought after session players in Jazz.

While doing session work, Robert began to branch out, forming his own band and playing Jazz at some of the most notable venues in the Southeast; among them were Mare - Bulls, the Hyatt Regency Lounge, the Blue Club, and Boots Randolph's Legendary Club in Historic Printers Alley in Nashville. Robert then expanded his talents, becoming the vocalist of his group, which led to numerous offers to perform in NYC at venues such as the Blue Note, Jazz Iridium, Jazz Standard and the Cotton Club. Robert and his group would eventually perform at venues throughout Canada, Asia, and Europe, including the Moulin Rouge in Paris, as well as at hotels and lounges around the world. Robert has also had residencies at the famed Hilton New Orleans, the Galvez Ballroom, and many others.

Robert starred in his own show, "Sinatra - The Man and His Music", for 7 years at various cabaret theatres in New York City, Montreal, and Belgium. The show was critically acclaimed whenever it was performed -- "Wherever you may see him, remember".