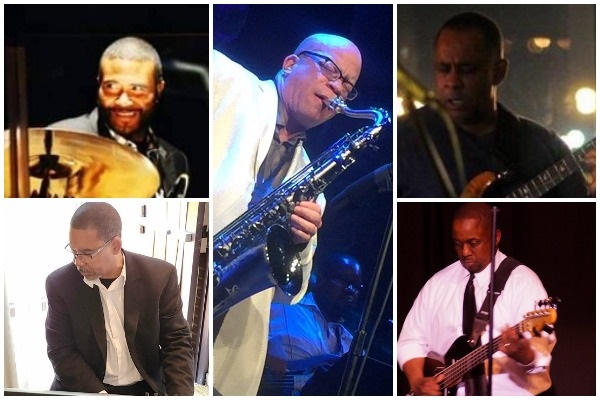 Recording of their performance on 8/29/21

His versatility and ability to play many genres have allowed him to tour and perform with a variety of notable artists and musicians. He has toured with the Temptations, Jean Carne, Billy Paul, Dexter Wansel, and Michael Henderson. He has also performed with Tom Browne, Walter Hawkins, Donnie McClurkin, Martha Reeves, The Jones Girls, Vicki Yohe, and many more. His musicianship can be heard on recordings such as Bind Me Closer (Michael Reed presents  Springfield Baptist Church); Capture the Fee (Lisa); Half Past Autumn (MSP); Live+7 (Elliot Levine and  Urban Grooves); Anticipation the Remix(Guilty Pleasures); The Path (Tracy Cutler); and Consciousness (Common Knowledge).

In addition to being a performer, Vinton Jones has also been a music educator for over 20 years, teaching private lessons and in Prince George’s County public schools. Vinton currently has an endorsement with the Baltimore Drum Co. His near-term aspirations are to open an arts academy and to soon record the music of his band, the Vinton Jones Vibration.

Kyle Turner is a creative and innovative artist who has warmed hearts with the sultry sounds birthed from his saxophone. A native of Houston, Kyle began to pursue his career in music in childhood, With mentors like Arnette Cobb, Conrad Johnson and Kirk Whalum, he quickly established himself as an exciting young talent.

Kyle is a music educator and lecturer in the Greater Houston Area school system. He also has his own radio show “The Jazz Club” which airs four days a week on KTSU 90.9 FM. He was honored in the 2008, 2010, 2012 and 2016 editions of Who’s Who in Black Houston.

Kyle and a childhood friend formed Bayou City Music Group, on which he released his fifth solo CD in 2011 and his sixth “Kyle Turner Live” in 2019. He is known as an artist who is constantly evolving and pushing his creative envelope to new heights that one must witness up close. HIs latest recording captures the energy and passion of Kyle’s live performances and gives the listener a taste of what it’s like to be a part of a his performance.