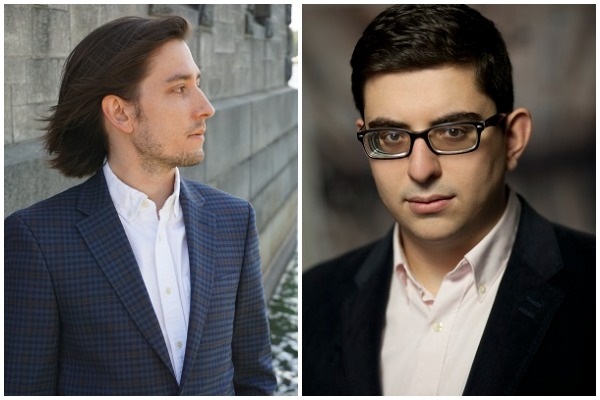 Recording of their performance on 8/22/21

Tenor Cooper Kendall and pianist Pierre-Nicolas return to An die Musik Live! for an encore performance to present some beautiful works by Beethoven, Falla, Poulenc and Brahms, with some jazz standards to top it all off.

Cooper Joseph Kendall is a twenty-four-year-old tenor from Old Lyme,  CT. He received his Master’s degree from The Mannes College of Music at The New School in New York City in 2000. In 2018, he earned an undergraduate degree from The New  England Conservatory of Music in Boston.

His previous roles include Don Ottavio (Don Giovanni) and Serse  (Serse). In 2019 he sang Abraham Kaplan in Mannes Opera’s Street  Scene. In the past, Kendall has attended SongFest, Aspen Music  Festival, and Classic Lyric Arts. In 2016, Kendall discovered his love for  Oratorio through a performance of Weihnachtsoratorium in Jordan Hall in which he sang The Evangelist.

He has a strong affinity for art song and strives to continuously perform and internalize different song cycles. His recitals have featured performances of several song cycles including Schumann’s Dichterliebe and Liederkreis Op. 39, Beethoven’s An die Ferne  Geliebte, De Falla’s Siete Canciones Populares Españoles, and  Poulenc’s Banalités. He currently studies and has been studying with  Anthony Manoli in New York City since 2013.

As a young musician, Pierre-Nicolas Colombat’s gateway to serious piano studies was through the music of Scott Joplin. His playing has been heard on WQED Pittsburgh as well as WBJC Baltimore classical radio. His dissertation Music and Modern Power: a Performer’s Tracing of Musical Virtuosity and Systems of Value was published in the summer of 2021. While his repertoire is largely centered on classical western art music, Colombat performs a  variety of styles from Ragtime, cabaret, and silent film music to the avant-garde repertoire of today. At the invitation of pianist and conductor Stephen Drury, Colombat performed in the Boston Symphony’s Prelude Series concerts. His work with Drury led Colombat to work directly with composers such as Georg Friedrich Haas, Timo Andres, and  Julian Anderson (Colombat’s performance of Mooring can be found through Andres's website). He was Artist in Residence with the Promenade Opera Company (Fidelio) and is currently an artist with the Boston Art Song Society.