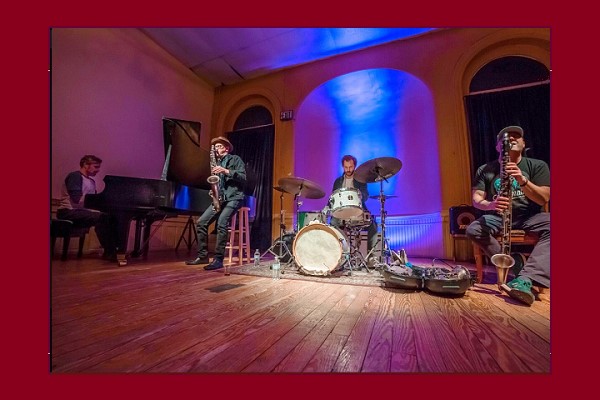 “You might know pianist Chris Pumphrey as the organizer behind the Baltimore Afrobeat Society, whose yearly big band blowouts are the stuff of Baltimore underground legend. Just as likely you know him as one of those guys in the city's left-field jazz/improv universe who's just sort of hard to miss, whether it's a regular Out of Your Head outing or a collaboration with a fellow scene figure, with quintet Il Culo, Baltimare, the Mobtown Palyers, Trixie Little, or, finally, with his own sextet." - Michael Byrne

Multi-reedman John Dierker is a major improvisational stylist, interweaving concepts augmented by howling lines, injections of blues-drenched choruses and Albert Ayler-like display of energy.” (All About Jazz.) A Baltimore native, Dierker has worked in a wide variety of musical settings collaborating with Peter Zummo, Jason Willett, Jad Fair, The Basement Boys, John DierkerMichael Formanek, and Marty Ehrlich. He is a longtime member of Lafayette Gilchrist and The New Volcanoes. Currently, he works with Quartet Offensive, Lubbock, and Microkingdom.

Drummer, recording artist, educator, Michael Kuhl hails from Baltimore. He studied and performed in numerous genres, making him a first call drummer for any situation. A graduate of Towson University, he has performed with jazz greats Dave Liebman, Tony Malaby, Michael Formanek, Dave Ballou, Ellery Eskelin and Claudio Roditi. Outside of jazz, Kuhl has shared the stage with international acts such as Beach House, Arboretum, Cigarettes After Sex, Tom Tom Club, and The Ravonnettes. Kuhl led his trio every Tuesday night at Bertha’s in Fells Point before the pandemic.

Recording of their performance on S8/18/21

This quartet of Baltimore-based improvisers creates spontaneous music that is at once intimate, synergistic, and expansive. Their extemporaneous compositions seamlessly integrate glacial chamber music meditations with blistering free jazz eruptions. Each foray into the unknown ebbs and flows — pushing, pulling, and thriving within a lush and cohesive ensemble sound.

“Such a wide range of spontaneous musical expression tends to flow effortlessly within any group of musicians who deeply trust one another as human beings. The bonds between each member of this ensemble have been cultivated over many years and many performances, in a myriad of musical settings. We've all played together in so many various bands through the years that our own music seems to play ITSELF in this group, and has ever since the very first gig. Effortless flow. True joy. Unfiltered humanity. That is the meaning of the name ‘The Great Unfolding’. This music plays itself through us, while we simply watch it happen! We are thus able to attain maximal musical results by exerting minimum effort. The process for us is to merely stay out of the way of the music.” — Derrick Michaels

“Derrick Michaels is an outstanding musician, with a beautiful concept of sharing this music with so many people to bring us together, and to make us appreciate what we all have within.” - Robert Shahid, host “Masterclass” WEAA

Baltimore-based tenor saxophonist Derrick Michaels is an inexorable force in the creative music community. As a saxophonist, he boasts a rich expressive palette and a propensity for dynamic performance. As a concert presenter and bandleader, Michaels leads entirely improvised concerts, endeavoring to integrate the stalwart lyrical essence of jazz with the venturesome sonic whirlwind of 21st-century classical music, and beyond. Engaging with an expressive continuum that spans the history of written and improvised music, he invites audiences into the birthplace of the most original form of music in existence — The Here and Now. Esteemed collaborators have included international Ellery Eskelin, Michael Formanek, Dave Ballou, Susan Alcorn, and many more.