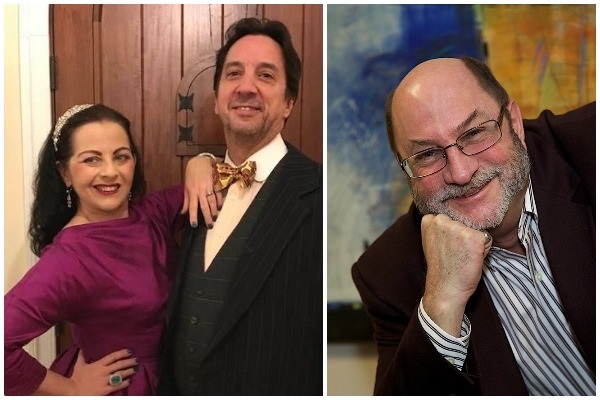 Dyana Neal has appeared in concerts, plays, musicals, and operas throughout the Baltimore-Washington area. Favorite roles include Mrs. Robinson in The Graduate, Lady Macbeth, Pitti-Sing in the Mikado, Sympathy the Learned in The Arabian Nights, Anne Boleyn in Royal Gambit, and The Fairy Queen in Iolanthe.  She was a member of the Baltimore Opera Chorus from 2002-2009. Ms. Neal is perhaps best known as the midday host at WBJC-FM, a position she has held since 1993.

Jim Knost is pleased to return to the An Die Musik stage with Dyana. Favorite roles include Scarecrow in "Wizard of Oz", Cervantes/Quixote in "Man of La Mancha, Lord Dundreary in "Our American Cousin", Captain Hook in "Peter Pan", Margaret in "Much Ado About Nothing", Boolie Werthan in "Driving Miss Daisy", Eric Weiss in "Brooklyn Boy", Judge Turpin in "Sweeney Todd", Giuseppe Palimieri in "The Gondoliers", and Sergeant of Police in "Pirates of Penzance".

Robert Hitz is a composer, pianist and master teacher. He is the quintessential modern artist -- his music spans genres and influences, and is open to all great musical ideas. Although classically trained at the Peabody Institute and Syracuse University, Robert began playing and composing through improvisation.

“Passion permeates his music -- powerful” (L. Billingsly, RSI). Whether in live concert or his recordings, Robert is an engaging and lyrical performer. He has recorded 4 solo CDs and 3 collaborative CDs, and will soon record a collection of new compositions. Robert has received Meet the Composer and ASCAP grants. He is a member of ASCAP, NARAS, and serves on the executive committee of the Society of Peabody Alumni (SPA).