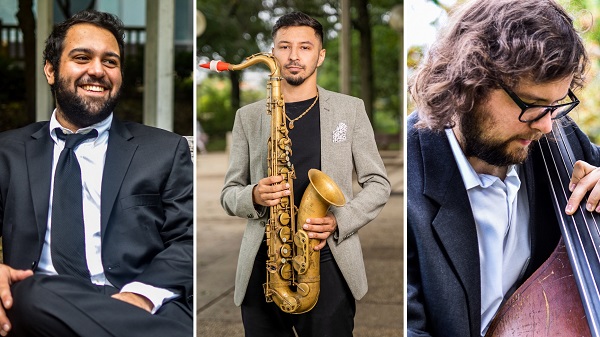 An die Musik Live, Cafe Mezzanotte and Jazz Beyond Borders join forces to host one of the hottest young jazz acts in the region. Armed with great tunes, great chops,  and the idealism of youth, they seek to encourage empathy and compassion, as we move forward together as a country and a planet. Familiar favorites and newly written compositions express diversity, invite unity, and offer a taste of the music featured in their upcoming recording.

Elijah Jamal Balbed is one of the District’s premiere jazz artists. Winner of the 2020 DC  Jazz Prix Competition, he was named Best Tenor Saxophonist and Best New Jazz  Musician by the Washington City Paper. He has since been featured by Capital Bop,  Smithsonian Magazine, and The Washington Post. An alumnus of the jazz studies program at Howard University, he has established himself as a top-notch, versatile musician. Balbed performed with Chuck Brown, the “Godfather of Go-Go,” from 2011  until Brown’s passing in 2012. Two years later, he founded The JoGo Project, a jazz/  Go-Go fusion band preserving the legacy of D.C.’s unique art form.

He has since toured internationally with such names as Lalah Hathaway, Eric Roberson, Jonathan Butler and Maysa. In 2018 and 2019 he went on cultural diplomacy tours in Russia on behalf of the U.S. State Department and the U.S. Consulate in Yekaterinburg. He recently performed at PAPJAZZ Festival in Port-au Prince, Haiti.

Stephen Arnold is a bassist, composer and producer in Washington, D.C. Known for his open ears, earnest expression, and unique musical voice, he is one of the region’s most in-demand upright and electric bassists. Hailing from Greenfield, Massachusetts, he studied jazz at George Washington University. Graduating in 2017, he dove headfirst into D.C.’s vibrant and diverse music scene, playing straight-ahead jazz, funk, Brazilian,  rock and improvised music. In 2018 he was selected for Betty Carter’s Jazz Ahead program at the Kennedy Center.

Julian Berkowitz is an in-demand drummer, percussionist, and educator living in  Washington, D.C. His music is rooted in American jazz, fusion, funk, and the rhythms of  Brazil. Born and raised in Easton, Connecticut to a Brazilian mother and Jewish American father, he enrolled at The George Washington University in 2013. There he studied with virtuoso Brazilian percussionist Alejandro Lucini whose mentorship played a crucial role in his development in the straight-ahead and Brazilian/Latin jazz spheres.  He graduated in 2017 and entered the D.C. jazz scene. Follow him and other trio members @ejbjazz  @julianberkowitzdrums #heystevearnold