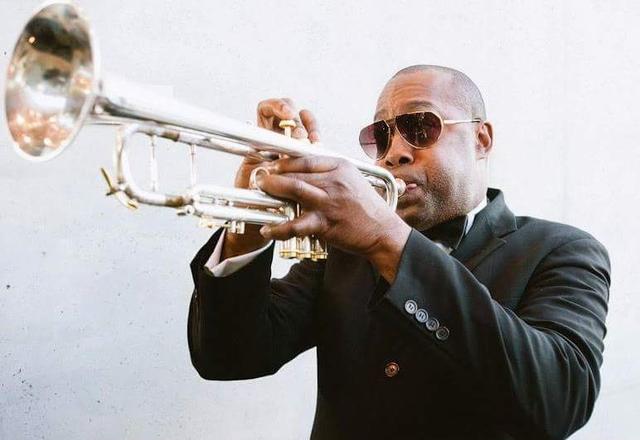 Thad Wilson presents Stories from a Master: A Celebration of 25 years

Thad was born in Fort Dix, New Jersey; however, his musical life started as a child living in Montgomery, Alabama under the direction of Mr. Curtis Hollinger. At fifteen, he moved back to New Jersey where he was quickly recognized for his talent and awarded the All-American High School Music Award and a place in New Jersey’s All-State Jazz Ensemble. Shortly after, he began studying privately with Jimmy Owens, former member of Dizzy Gillespie‘s Big Band. It was Jimmy who gave Thad a glimpse into the life of a true professional musician. In his early days, Thad performed at the Village Gate, Blue Note, Visiones, Knitting Factory and many other New York City venues.

While in New York, Thad was a member of Charlie Persip’s Super Band and had a brief stint with Illinois Jacquet. From there, he moved to Atlanta and made his way on the early hip-hop scene performing with Bone Crusher, Khalfani, and many others. When he found himself in DC in 1997, intending to return to New York, he was drawn into the rich tapestry of musicianship and history. Traversing the former stomping grounds of Duke Ellington inspired his creation of The Thad Wilson Jazz Orchestra in 1998 as a way to continue the legacy of big band music in the nation’s capital. The feat of reaching this twenty five year milestone is one to which Thad has been devoted out of pure passion and determination.

*Please note:
1. Final sale, no refunds, not transferable.
2. $15 food/beverage minimum per person not included in ticket price.
3. Seating first come at the door. Doors open 6 PM & 8:45 PM respectively.
4. Photography or Recording of any kind is prohibited during the performance.
5. Keep conversation to a minimum during the performance.