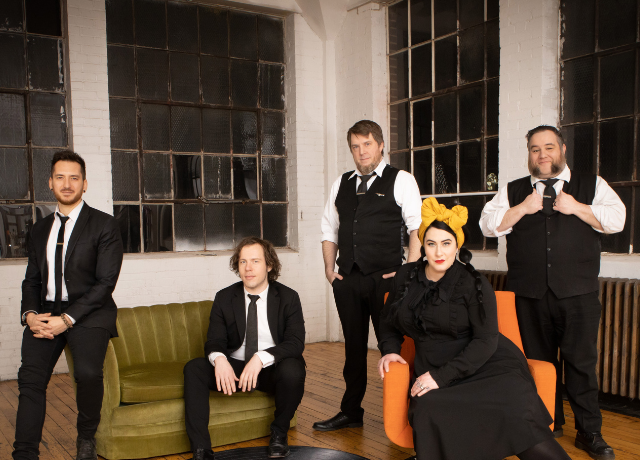 Davina and The Vagabonds

Much like the music, the story spurns era, expectation, and classification. The often unbelievable, sometimes harrowing, and wholly inspiring journey of Davina Sowers gave birth to her eponymous band Davina and The Vagabonds in 2004. As the tale goes, she grew up in economically depressed Allegheny town of Altoona, PA, which she now describes as “awesome in the industrial era, but horrible for high school.” She was adopted by her much-older stepfather when he was in his 80s; he passed when she was just 13. Through him and his Edison phonograph, she first heard The Ink spots, Sydney Bechet, Louis Armstrong and Louis Prima, Sister Rosetta Tharpe, and many others. “Great man. He was my angel and still is,” she says.

To this day, Davina still refers to music as “my first and eternal love.” Despite early dalliances with classical piano and guitar, she developed a heavy drug habit in high school, which morphed into heroin dependency, left her homeless, sent her in and out of jail, and brought on all manner of trouble. Kicking dope on the streets, she “got clean, started the band, and worked [her] ass of every day since.”

“They dare to be different. Davina zips to near impossible heights in a divine declaration of romance” - DownBeat Magazine

The front-woman, singer, and multi-instrumentalist describes this wild ride and herself best. “I am a miracle,” she exclaims. “It really is amazing I’m alive. I can barely express the life I’ve lived. Starting the band saved me. Even though I’ve been clean for a long time, I still suffer, but I persevere. For me, to be this miracle and shine for myself and others is really important.” Davina and The Vagabonds shine every time they play. To date, they’ve performed in 45 states, 12 European countries, and two Canadian provinces. Not to mention, they’ve earned feverish acclaim from the Chicago Tribune, NPR, and more in addition to performing on BBC’s international favorite late-night program Later… With Jools Holland and appearing on PBS’s Bluegrass Underground. The group’s full-length debut, Black Cloud, arrived in 2011 and cemented them as hometown heroes in Minneapolis. 2014’s Sunshine bowed in the Top 15 of Billboard’s Top Blues Album chart. During 2016, they unveiled their live album, Nicollet and Tenth, to the fervent embrace of fans. In between, they play nearly 200 gigs annually, including gracing the stages of festivals such as Edinburgh Fringe Festival.