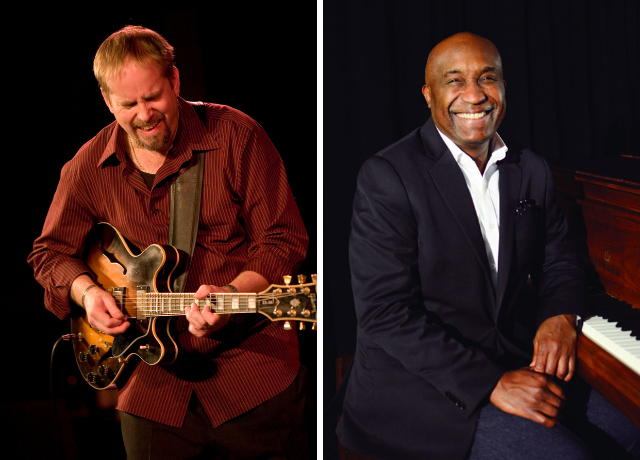 The musical powers from guitarist Dave Stryker + pianist/keyboardist/organist Bobby Floyd combined to pay homage to the great Wes Montgomery prove to be nothing less than a show-stopping performance.

Whether you’ve heard guitarist Dave Stryker leading his own group (with 33 CD’s as a leader to date), or as a featured sideman with Stanley Turrentine, Jack McDuff, and many others, you know why the Village Voice calls him “one of the most distinctive guitarists to come along in recent years.” Hot House magazine awarded him Best Guitarist Fans Decision for 2017.  He was recently voted once again as one of the top Jazz Guitarists in the 2022 Downbeat Critics and Readers Polls for the 15th time.
"... Stryker possesses golden tone, urgent style, and the kind of heated technique that can blow the roof off any gig." - Jazztimes

The passion with which Bobby Floyd plays piano, organ and keyboards are the result of his natural ability, his love of music, and years of practice. Whether performing jazz or gospel, as a soloist, with a trio or big band, he is a superb musician who has many distinguished appearances to his credit.
Floyd has toured and performed extensively with Ray Charles, Rusty Bryant, Jeff Tyzik, Chris Howes, Byron Stripling, Sarah Morrow and his own trio. His current touring schedule includes performances as featured soloist with orchestras throughout the USA and Canada, including the Rochester Philharmonic, Vancouver Symphony, Columbus Symphony, Edmonton Symphony, Detroit Symphony, ProMusica Chamber Orchestra, and many others. Floyd is also a frequent soloist with the Columbus Jazz Orchestra where his soulful sound has backed artist such as Chuck Mangione, Houston Person, Branford Marsalis, Roy Hargrove, Mavis Staples, Gerald Wilson, Wycliffe Gordon, John Clayton and countless others. His recent performances in Europe and Japan have garnered high praise and he continues to accompany the top jazz, blues and gospel artist in the country.