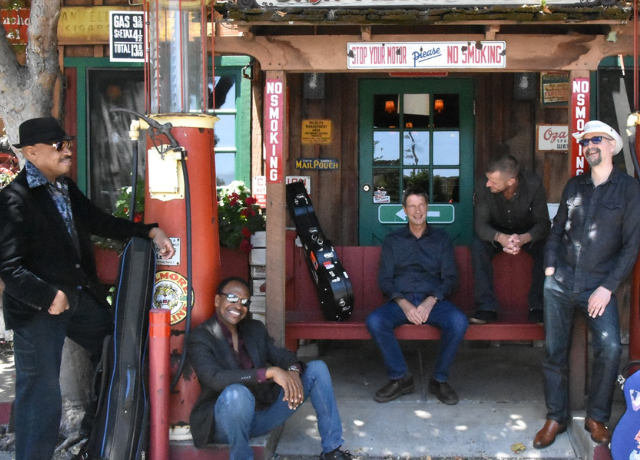 Triple Grammy nominated artists Acoustic Alchemy are fast approaching their quarter century of recording since 1987’s Red Dust and Spanish Lace established the ensemble as an ever evolving force in contemporary jazz.

Acoustic Alchemy’s rich legacy is based on the extraordinary airplay, sales and critical reception given the many early Nick Webb-Greg Carmichael led recordings followed by those helmed later by Carmichael and Gilderdale. Carmichael with each successive recording is carrying on a legacy begun by Webb and a guitarist named Simon James in the early 80s; those early recordings were collected for the 1992 collection Early Alchemy.

The road to instrumental stardom began when Webb and Carmichael provided the one-off-in-flight entertainment for a Virgin Airlines England to America flight, in search of an elusive recording contract; they often liked to say they “played their way to America”. Signed to the MCA Master Series label by Tony Brown, their popularity took off in conjunction with the rise of the New Adult Contemporary radio format.

Acoustic Alchemy’s early MCA albums—starting with Red Dust and Spanish Lace and continuing with 1988’s Natural Elements and 1989’s Blue Chip—were all later re-released on GRP. One of the band’s most remarkable recordings was 1996’s live in the studio date Arcanum, which featured new arrangements of classics, a few new tracks, and full orchestration. Recorded over three days at Pinewood Film Studios in England (home to all the James Bond films), the sessions were filmed by director Aubrey Powell for a television documentary of the band, released on video as Best Kept Secret; GRP re-released this on DVD in July, 2006 with extra archived live performance and documentary footage. In 2002, Acoustic Alchemy also released Sounds of St. Lucia, a CD/DVD live concert package based on a performance recorded by BET television.

“The band has been through a lot of changes over the years, but the concept of two acoustic guitars has always been the emotional centerpiece which draws people close,” says Carmichael. “I’m happy these days because I love all the musicians in the band and its great touring with them and playing live onstage. For me, whether we’re jamming or stopping for gas at a truck stop, it’s honestly like being on vacation, and we’re excited to have so many loyal fans who have enjoyed taking the journey with us. The positive spirit behind our music and album titles comes from the wonderful relationship we have always had with them.”

Complementing their live performances are familiar Acoustic Alchemy recording and touring members Greg and Gary Grainger from Baltimore, MD, who provide the powerhouse rhythm section, and the remarkable Fred White on shimmering keyboards.