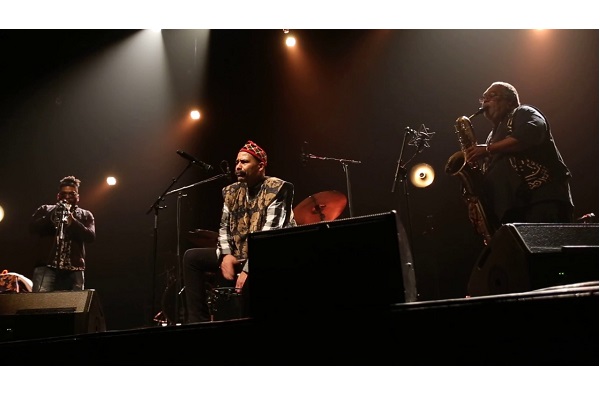 Dr. Kahil El’Zabar, former Chairman of the internationally acclaimed, AACM (Association for the Advancement of Creative Musicians),is considered by his peers to be one of the most prolific innovators of his generation, recording over sixty projects, and the awardee/winner of numerous international awards as both a musician and composer. Founding board member of NCFE (National Campaign for the Freedom of Expression), in 2014, Dr. El’Zabar was knighted by the Counsel General of France, and christened as a “Chevalier Medal of Letters”. In 2012, Obama’s administration awarded Zabar the International Ambassador’s Award in the Arts. Hehasworked with such luminaries as Dizzy Gillespie, Cannonball Adderley, Stevie Wonder, Donnie Hathaway, Pharoah Sanders, Neneh Cherry, Nina Simone, Ntozake Shange, David Murray, Nona Hendryx, Lester Bowie, and many others.

Corey Wilkes has established himself as one of the best improvising trumpeters in the modern era. Wilkes approaches jazz standards with his own unique sensibilities, combining them with his deep appreciation of hip-hop. Corey has shared the stage with numerous jazz masters including but not limited to; Wynton Marsalis, James Moody, Kurt Elling, Roscoe Mitchell, Harry “Sweets” Edison and Mulgrew Miller.

Alex Harding is considered one of the top baritone players in music, and a strong New York City fixture there since the early 90s, who “attacks the music with steamroller momentum and uncommon ferocity…sheer fireworks.” (Jazz Times).  Born and raised in Detroit, Michigan, as a child, Harding started on the tenor saxophone, and also studied the soprano, alto and baritone saxophones, as well as clarinet and flute.  A powerful and innovative saxophonist, Harding has a unique and contemporary baritone sound.   Harding’s last Transparent performance was as a member of Francisco Mora Catlett’s AfroHORN ensemble.   Harding has also worked with Julius Hemphill’s Saxophone Sextet, Muhal Richard Abrams, Craig Harris, Lester Bowie, Frank Lacy, Oliver Lake, David Murray’s Big Band, the Mingus Big Band, and Jayne Cortez’s Firespitters, among others. He made his debut in 1997 with the Sun Ra Arkestra under the leadership of Marshall Allen. More recently, he has performed with the Roy Hargrove Big Band, and the broadway show FELA, and with Aretha Franklin.