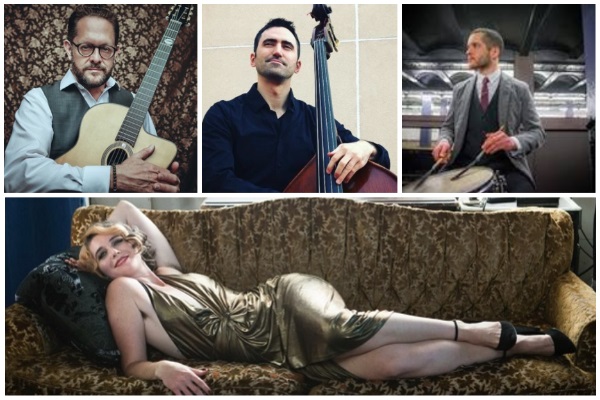 Sweet Megg (Megg Farrell) is a New York City bred vocalist who performs a range of material steeped in the American traditions of jazz and blues. She splits her time between Nashville and Brooklyn where she performs early jazz, blues, Western swing, classic country, and her original Americana. She released her first record, Under the Moonlight, in March 2020 on Dala Records and her second, I’m in Love Again, in 2021 with Turtle Bay Records.  Her vocals reveal a vast variety of influences, ranging from Billie Holiday to Patsy Cline to Edith Piaf to Bessie Smith.

Megg spent her first 7 years as a jazz singer leading the original formation of the group “Sweet Megg & the Wayfarers,” who performed traditional jazz & blues in New York City, France, Russia, and up and down the East Coast. After touring in the South, Megg started to introduce Classic Country and Western Swing into the band’s repertoire.  Eventually breaking out solo, she began working with other musicians and groups from the scene of early American music such as Postmodern Jukebox, Jerron “Blind Boy” Paxton, Ricky Alexander,  and eventually meeting Scott Asen of Turtle Bay Records who she now works with full-time. . https://sweetmegg.com/

Hot Club of Baltimore performs inspired arrangements of Django Reinhardt repertoire, French Musette and Jazz. Michael Joseph Harris is guitarist and artistic director of the group which consists of a collective of top jazz musicians. The ensemble boasts a variety of configurations which include the instrumental trio of 2 guitars and bass, the classic quintet with violin, the late 40's “Django in Rome” sessions adding piano, drums, and horns, and the big band sound of the early 50's when Reinhardt performed with Duke Ellington. The group often features captivating female vocals on Gypsy jazz renditions of Edith Piaf, Eartha Kitt, Maxine Sullivan, Charles Trenet, Jacques Dutronc, Ella Fitzgerald, and Henri Salvador.

Limited in-person seats:  $25 / $10 full-time students with valid ID
Proof of COVID-19 vaccination required at door
In-person attendees receive a link to the recording to view for one week.
Ticket sales end 1 hr before showtime; tickets can be purchased at the door if any remain.

Streaming  Cost is $15
The link will be revealed to live stream participants 15 minutes before the show
and will remain active through Aug. 12