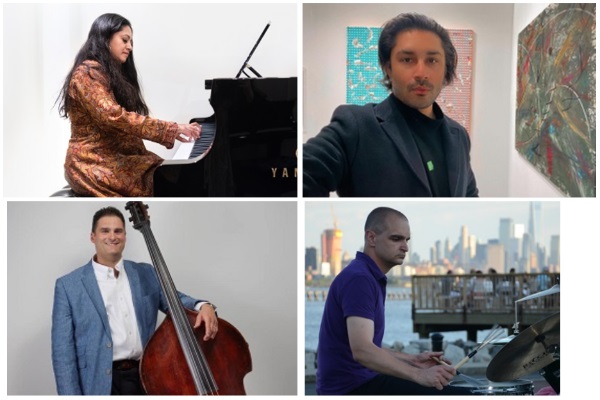 Charu Suri - Pianist and composer Charu Suri treads fearlessly between genres, pulling global influences that range from the mood-anchoring Indian ragas, Sufi music, to the trio. Her ground-breaking albums, The Book of Ragas, and its sequel, The Book of Ragas vol. 2, have often elicited the response, "I've never heard this type of sound before."

One of the few female composers from India to perform at Carnegie Hall, Charu has lived in four continents and writes music that reflects her journey as a traveler and her training as a classical music piano prodigy. What started as an experiment, "Book of Ragas" has turned into a niche that she is increasingly becoming known for.

In her latest "Book of Ragas vol. 2" was highlighted by Jazz at Lincoln Center as an August new release and has won numerous awards. Suri uses her native Carnatic and Hindustani ragas (modal scales) as the basis for lyrical and energetic piano improvisations, layered with Sufi singing. She is no stranger to the art of the Songbook, too (attribute this to her listening to Bill Evans and Billie Holiday records as a kid). "The New American Songbook" has garnered many awards, including a "Band Single of the Year" crystal trophy for her song, Bluesy, awarded by the International Singer-Songwriters Association (ISSA) in 2021. She is a four-time ISSA finalist for 2022.

Falsa: 14th Century Sufi Music for Voice Featuring contemporary arrangements of 14th Century Sufi music, Falsa transcends genre-specificity and cultural preconceptions in collaboration with a diverse array of improvisational musicians. He has performed with Charu Suri twice at Carnegie Hall and returns there for a third time in November 2022.

Jason O’Brien, Drums/Vibraphone, is a NYC area percussionist and educator, who maintains an active gigging schedule, YouTube Channel, and studio of over 30 students. He is an adjunct at Passaic County Community College and has
been invited to be an artist in residence at Independence Community College in Kansas in the fall of 2022.  In 2020 and 2021 he won the DCI Performers Showcase All Age Division on marimba.  Additionally, he arranges and designs productions for award winning East Coast marching ensembles.  Recent projects include recording his own unique vibraphone arrangements of well known compositions, and recording marimba for Ben Shepard on an upcoming album. As an active member of the Charu Suri Trio Jay has recorded three albums, and performed at Carnegie Hall.

Justin Lee, Double Bass,  is a versatile upright and electric bassist, who performs regularly in a wide variety of styles. He is currently a member of the New York City based Chelsea Symphony Orchestra, Charu Suri and Friends, The New Jersey Capital Philharmonic, MRB Jazz Project, founding member of the Power House Big Band and Bob Page Jazz Trio, as well as co-owner of Allemande Ensembles, LLC.

Streaming  Cost is $15
The link will be revealed to live stream participants 15 minutes before the show
and will remain active thru Sept. 9

Performing the Book of Ragas 1 & 2. Get the full raga jazz experience -- Come listen to this Sufi singer and ensemble. The instrumentation will be vibraphone/drums, piano, Sufi singer, and double bass.