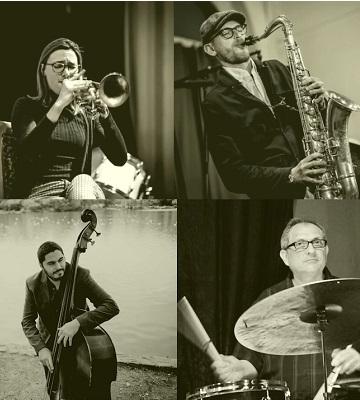 Erin Connelly is a Baltimore-based trumpet player, improviser, and teacher. At an early age, Erin was inspired by the beauty, vulnerability, and romance in the music of trumpeter, Chet Baker.  As an improviser, Erin embodies a warm, lyrical, and sensitive approach to the trumpet. With a sound that is dark, round, and nuanced, her compassionate sensibilities cultivate space in which layers of music may unfold around her. This ensemble-oriented approach allows Erin to create and deliver stories through her music, encompassing the sonic forces around her into her narrative tapestry. She holds a B.M. in Jazz Trumpet Performance from Towson University. Erin has studied under many acclaimed trumpet players.

Baltimore-native Derrick Michaels is a saxophonist | composer | bandleader and an audacious force in the creative music community. He boasts a sonorous tone, a rich expressive palette, and a propensity for dynamic improvised performances. As a bandleader, he invites a wide array of brilliant musicians into the creative fold, engaging with an expressive continuum that spans the history of written and improvised music. With deep roots in straight-ahead jazz, along with decades of experience collaborating in indie-rock, pop, and other eclectic music scenes, his expressive gamut reflects a love for the universal expression of human nature through musical vibrations.

Using gut strings and a personalized technique, bassist Zach Swanson has developed a conception of the double bass that heightens the integrity of various musical environments.

In 2021, Swanson performed on Playfield's Volumes 1-3 on Orbit577 which was included in Gary Chapin of The Free Jazz Collective's Top 10 albums of the year. Swanson appeared on Ayumi Ishito's 2022 release Open Question Vol. 1 on 577 Records, which was called "brilliant and lasting music" by John Pietaro in The New York City Jazz Record. Swanson will be releasing Trio Xolo's debut album with saxophonist Derrick Michaels and percussionist Dalius Naujo on 577 records in summer 2022.

Streaming  Cost is $10
Link will remain active for one week