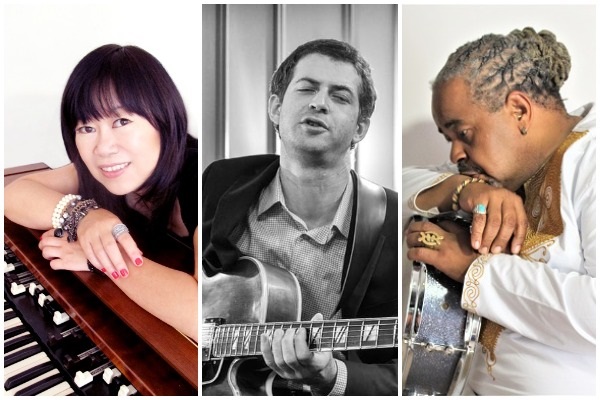 Akiko Tsuruga - She’s “Sweet and funky,” “Cute and Bad”.  A Composer. A Performer Extraordinaire. Raised in Osaka, Japan, this talented musician began studying the organ at the age of three at the famed Yamaha Music School. Akiko launched her career immediately after graduating from Osaka College of Music, performing with world- renowned jazz musicians from the U.S.

Guitarist Charlie Sigler has been active member of the music community since his high school years studying and performing in the Baltimore/Washington D.C. area. A recent graduate of William Paterson University with a B.A. in Jazz Performance, Charlie has performed with many greats of the music including Christian McBride, Slide Hampton, Billy Hart, Victor Lewis, Lenny White, Winard Harper, Harold Mabern, Norman Simmons, Joe Magnarelli, Myron Walden, Akiko Tsuruga, Jared Gold, Vince Ector, Bruce Williams, Jerry Weldon and Radam Schwartz amongst many others. He has performed at clubs and festivals throughout the region including the Montclair Jazz Festival, Litchfield Jazz Festival, Mid-Atlantic Jazz Festival, AFRAM and the Berks Jazz Festival.

Eric Kennedy, a Baltimore native, is a drummer, vocalist, percussionist, educator and composer. Eric has performed, toured and recorded with many jazz greats. He is a bandleader and a member of the Bobby Watson Quartet/Quintet, Inside Out w/ Lafayette Gilchrist, Todd Marcus Quartet, Jeff Reed Trio and co-founder of Dreamworld, Kinetic Sounds and Simply Eric with Eric Byrd and Eric Wheeler.

Eric has given music clinics, workshops, concerts and lessons worldwide. He taught in the Baltimore City Public Schools and on faculty in the Peabody Conservatory of Music Jazz Department from 1998-2001. Eric has received numerous awards and grants for performance and composition. He was 2004 runner up in the Billie Holiday Vocal Competition and first place band member in the Chick Webb Jazz Combo Competition in 2008 and 2009.

Akiko’s newest excitement is a trio project featuring jazz celebrity drummer Jeff  Hamilton and superb rising guitarist Graham Dechter. Their first recording, “Equal Time” was released in 2019. This thrilling trio has been touring around the US. and Europe. Akiko continues to be a constant draw on the NY Jazz scene. In 2022 she will tour with the Clayton Hamilton Jazz Orchestra in Europe.