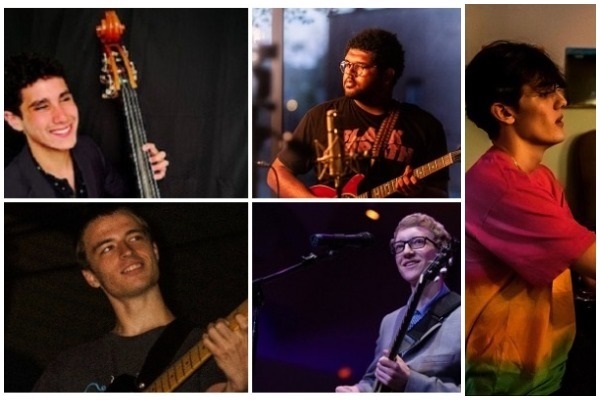 Nico Wohl is a guitarist and composer from Great Barrington, Mass. In high school, he attended the Manhattan School of Music Precollege for jazz guitar. In 2018 and 2019, he was a member Carnegie Hall’s NYO Jazz. With this program, he toured Europe with Dianne Reeves in 2018 and China with Kurt Elling in 2019. He is a 2019 Youngarts finalist in jazz. He attends he Peabody Conservatory, where he studies with guitarist Matthew Stevens. Although he grew up playing and studying jazz, he strives to be a musician who can blend into a variety of musical contexts. His own composition is mainly influenced by jazz, but takes cues from Brazilian and classical music, among other styles.

Charlie Reichert Powell is a guitarist, producer, and composer based in Baltimore. Originally from Chicago, he grew up both playing in the rich music scene there and contributing to the electronic music scene on the internet under the alias Zephire. As a guitarist, he is embedded in the jazz and RnB scenes, explores free improvisation in various settings, and works regularly as a freelance session musician. As a producer, aside from his solo work, he collaborates with a variety of musicians, pivoting between pop, RnB, rap, alternative, electronic, and more experimental work on top of freelance commercial work. He has composed extensively for his own group, in addition to writing acousmatic/electroacoustic works, multimedia pieces, and big band charts. Charlie has performed, recorded with, and produced for Wic, Ellie Banke, Warren Wolf, Tim Green, Quincy Phillips, and AACM head Ernest Dawkins.He attends Peabody Conservatory, where he studies guitar with Matthew Stevens.

Ethan Bailey-Gould is a guitarist and composer based in Baltimore. He currently studiesjazz guitar under Matthew Stevens at the Peabody Institute. Ethan was born in 1999 in Toronto and grew up on Florida’s Space Coast. In 2018 he played in Carnegie Hall’s NYO Jazz on their European tour, playing with Sean Jones, Dianne Reeves and Wycliffe Gordon. Beforeng at Peabody he was entirely self-taught on guitar. Ethan's music is rooten in jazz, and he likes the influence of heavy metal, funk, reggae, and psychedelic rock.

Aidan Taylor is a Freshman at the Peabody Conservatory, where he is a dual degree student in Jazz Bass Performance and Recording Arts and Sound Engineering. He studies under Kris Funn and prestigious pianist Stephen Scott. He is a five-time Downbeat Magazine Student Music Award winner, a 2020 and 2021 YoungArts Winner for Jazz Bass, and was selected for the 2021 Florida All-State Jazz Band. Also in 2021, his small ensemble was the winner of the Downbeat Student Music High School Small Ensemble Award and a finalist in the National Jazz Festival. His big band was a finalist in the 26th Essentially Ellington Competition and Festival, and the 13th Annual Mingus Festival. Aidan was chosen as the 2020 Young Artist of the Year for the Society for the Preservation of the Great American Songbook, and was selected as the bassist for the 2020 Jazz Band of America.

Claudio Silva began studying at the Peabody Conservatory when he was 19, Claudio has already played with some names like Marcus Roberts, Emmet Cohen, Russell Hall, Warren Wolf, Javon Jackson, Jason Marsalis, Greg Gisbert, Michael Dease and many more. Starting private drum lessons at age 7 with Ettiene Fuentes Jr. (who has played with Arturo Sandoval, Chayanne and many more) Claudio soon realized then that he was very passionate about music.He aAttending the New World School of the Arts. He was selected for the Herbie Hancock Institute Peer to Peer All Star Jazz Sextet with Sean Jones, and opened for Jazz at Lincoln Center under the direction of Wynton Marsalis. He received YoungArts awards 2018-2020, a Downbeat award in 2020, and recently joined the Sean Jones Quartet.

Limited in-person seats: $20 / $10 full-time students with valid ID
Proof of COVID-19 vaccination required at door.
In-person attendees receive a link to the recorded performance to watch for one week.