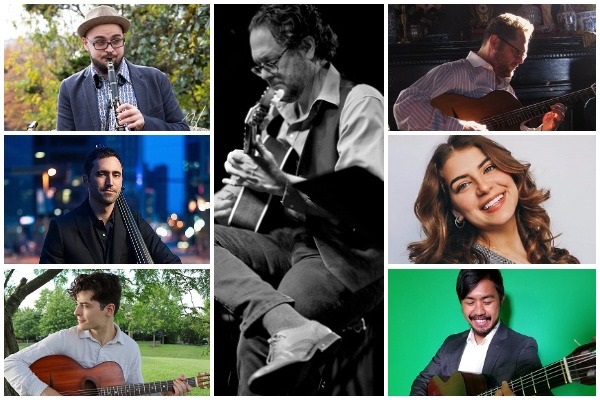 Hot Club of Baltimore brings a festive combination of New Orleans style Trad jazz and Gypsy jazz featuring the hottest vocalist on the local scene today, 21-year-old Dominique Bianco, and the incredible Gabriel Wallace on sax and clarinet. This time the band also includes the classic Django Reinhardt setup of three guitars and upright bass. The ensemble will perform a combination of virtuosic French waltzes, classic swing music, hot Gypsy jazz, and even some holiday tunes to warm your heart during the season.

Originally from Staten Island, New York, Jazz Vocalist Dominique Bianco moved to Virginia in 2017 and currently is a Senior Jazz Studies Major at George Mason University. Dominique has been inging, writing and recording music for over 10 years and specializes in  jazz, R&B, and pop genres.

Gabriel Wallace began his professional career as a saxophonist at the age of 16 years old in Southwest Florida. Gaining firm roots in rock and blues music, Wallace soon gravitated toward the jazz idiom and adopted the clarinet as a secondary instrument. He began performing regularly with jazz bands in the small community of Naples, Florida thus sparking his professional career. Relocating to the DMV in 2018, he has been well received by the Jazz community as a saxophonist and clarinetist. Since his arrival he has played in large ensembles such as The World Famous Glenn Miller Orchestra and the AFree Symphony, and now leads his own small groups in Baltimore and D.C. Now he is once again an active performer after the long hiatus of the Pandemic and is thrilled to celebrate the tradition of music with like-minded individuals. Gabe also maintains a presence as an educator through private lessons and as a faculty member of The Levine School of Music.