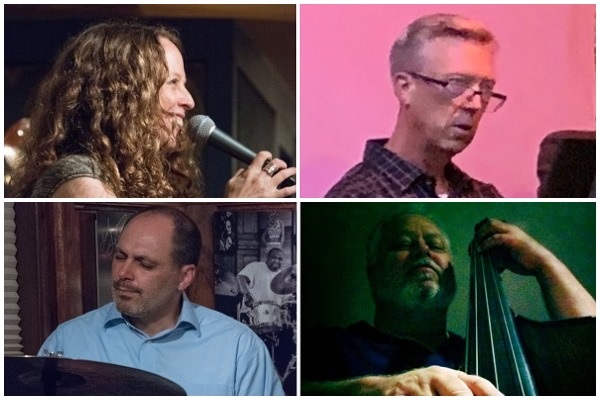 Born in Toronto, vocalist Renée Tannenbaum appeared in a variety of venues in Canada and in Italy before moving to New York City in 1996. There, she was a founding member of Treble, a female a cappella group which performed its eclectic repertoire in clubs around Manhattan. Renée has been living in Washington, DC, since 2001, appearing as featured vocalist with Dial 251 for Jazz, Night & Day, the Seth Kibel Quartet and the Hot Club of DC gypsy jazz band, and now fronting her own combo.

With her lyrical interpretations of standards in English, French, Spanish and Italian, Renée plays with the area’s top jazz musicians, bringing her warm and engaging energy to the city’s best music venues. She has performed at several of the Smithsonian’s prestigious concerts, including the Take Five! jazz series at the American Art Museum and the National Gallery of Art’s Jazz in the Garden concert series. Renée also tours internationally, in Italy and the Czech Republic. Her CD Sway was released in 2006.

Pianist Jon Ozment is a performer, instructor, composer and arranger. He holds a Master's Degree in Jazz Studies from the University of Maryland, College Park, and pursued private study with Paul Bley. Known for his superb musicianship, Jon has performed extensively in the jazz and contemporary jazz fields, appearing on recordings with Buck Hill, David Yarborough, Origem, Matt Belzer, and Vinny Valentino. He has performed in concerts with Jon Faddis, Bobby Hutcherson, Al Jarreau, Nneena Freelon, Frank Foster, Clark Terry, Frank Wess, Chuck Brown, Curtis Fuller, John Handy, and Larry Ridley, and has toured nationally with Marlena Shaw, Miki Howard, Rain Pryor, Kim Waters, and the Blackbyrds. Throughout ’97-’99, he toured the States and Europe with saxophonist Maceo Parker. Jon is Adjunct Professor of Jazz Piano at the University of Maryland, College Park and at the American University. He has conducted artist residencies under the auspices of the Kennedy Center for the Performing Arts and the American Composers Forum.

Born and raised in the New York Metro area, Bob Shann has been playing upright bass for over 25 years. He received a BA degree in Classical Performance from SUNY at Stony Brook University in 1986. Bob has had the opportunity to back up many local musicians as well as some well-known artists, such as Dave Liebman, Toots Thielemans, Mulgrew Miller, Joanne Brackeen, and many others. He currently resides in the Washington, DC area.

Gary Montanaro is a professional jazz drummer who has been performing in the DC metropolitan area for over 20 years. Originally from New York, he minored in music at Towson University where he studied under Berklee Graduate drum instructor, Grant Menefee, and went on to study privately with some of the area’s finest jazz drummers such as Dominic Smith. Gary received several lessons with the late, great local jazz drumming legend, Mike Smith. Praised for his solid rhythms and swinging groove, Gary has performed at many local venues. He was the Music Coordinator and Manager of Houston’s Woodmont Grill’s “Live Jazz Nightly” venue for over 12 years. He could be seen performing there 5 nights each week until tCOVID restrictions in March 2020 put their live music venue on hold.