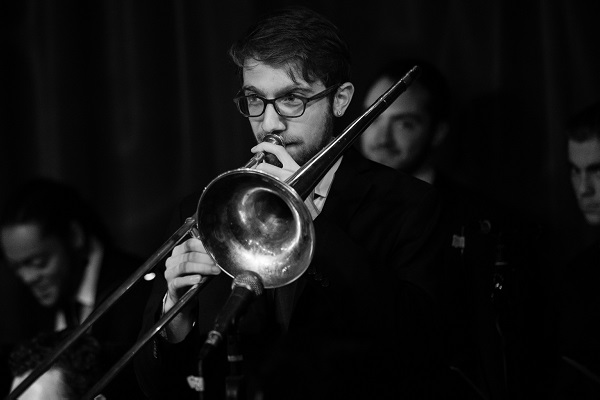 Caleb Eckstein is a 23-year-old freelance trombonist, composer, and arranger based in the Northeast. Born and raised in New Jersey, Caleb was interested in jazz at a very young age, as his father played the tenor saxophone and loved Miles Davis and John Coltrane. Caleb picked up the trombone and played throughout his grade school years, participating in Princeton High School’s nationally acclaimed studio band. He then moved on to Northwestern University to pursue a double major in Jazz Trombone Performance and Neuroscience, studying privately with world-renowned trombonists Vincent Gardner and Tom Garling. During his young music career, Eckstein has performed or recorded with Randy Brecker, Benny Benack, Brianna Thomas, Kenny Washington, Don Vappie, Victor Goines, Sam Wolsk, Allison Spann, Warren Wolf, and many more. He has played at clubs such as Birdland, Dizzy’s, Chris’s Jazz Café, and Winter’s. While at Northwestern, he also developed a passion for composition/arranging. After graduating in 2020, Eckstein formed the Congregation Jazz Orchestra with drummer Jared Decker, a classmate from NU, in a similar vein to the great big band pairings of Thad Jones/Mel Lewis and Ellington/Strayhorn. The CJO debuted and recorded their first performance in Lake George, NY, in late August 2021, as part of the NOGO Arts concert series.

For this performance, Caleb will pay homage to the great Trombone quintets, such as JJ Johnson/Kai Winding and Carl Fontana/Bill Watrous. He has the honor of sharing the stage with friend and colleague Dave Mosko. Dave is an acclaimed trombonist who currently plays first chair for the Army Blues Band and was the winner of the 2019 American Trombone Workshop. Caleb, Dave, and the band will play some a mixture of originals, classics, and everything in between.