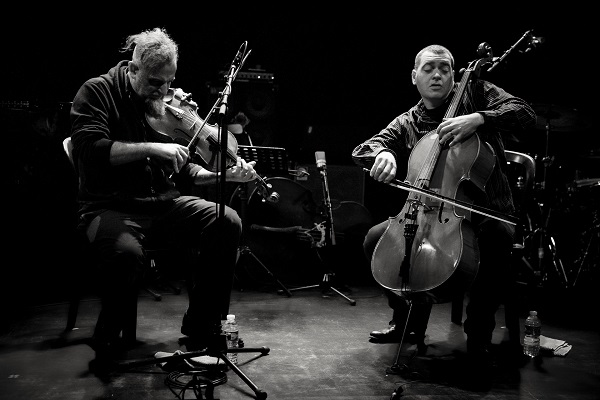 Daniel Levin is “one of the instrument’s most brilliant contemporary practitioners” (The Wire), “ridiculously fluent, virtually overflowing with ideas” (New York City Jazz Record) and “very much the man to watch.” (Penguin Guide to Jazz). No matter what setting he plays in, cellist Daniel Levin occupies a musical space bordered by many kinds of music, but fully defined by none of them.

Over the course of a twenty-five year career, Mat Maneri has defined the voice of the viola and violin in jazz and improvised music. Born in Brooklyn in 1969, Maneri has established an international reputation as one of the most original and compelling artists of his generation, praised for his high degree of individualism, a distinctive marriage of jazz and microtonal music, and his work with 20th century icons of improvised music.

“Violist Mat Maneri has a sound all his own: with his mahogany tone and muscular low register, he slithers from note to note like a satiated snake.” (Chicago Reader)

“...a gritty but eloquent dialogue of long tones, viscous double stops, and sensual arcs..The pair revel in the tones between the standard notes in the octave, blending sounds with palpable relish.” - The Chicago Reader

“There is a sense of adventure and a quiet tumultuousness that keep the players and listeners baited for the next unexpected moment or shift. The Transcendent Function is a recording that is both demanding and rewarding in kind. It’s an avant-garde conversation between two complimentary musicians who trust each other’s directions and instincts.” - 4-star review, The Free Jazz Collective

“Jung reminds us that “Consciousness offers the unconscious its input which is form and structure. Room must be left for spontaneity to emerge. The Transcendent Function is about addressing this conflict.” The impressive musical reconciliation Levin and Maneri have achieved accepts Jung’s challenge; as is often the case in its psychological context, The Transcendent Function may not provide conclusive answers, but poses engaging new perspectives and intriguing possibilities.” - from the liner notes by Art Lange