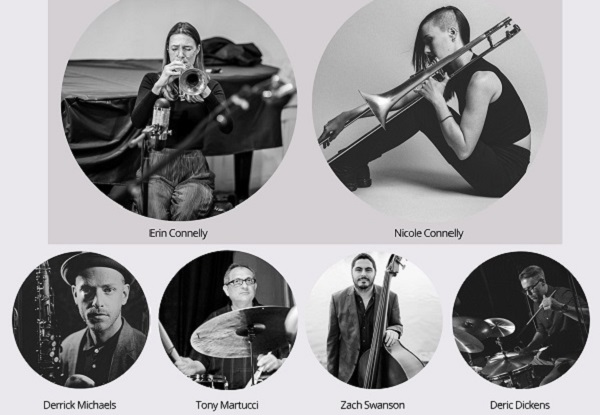 Erin Connelly is a Baltimore-based trumpet player, improviser, and teacher.

At an early age, Erin was inspired by the beauty, vulnerability, and romance in the music of trumpeter, Chet Baker.  The poignant lyricism in his trumpet playing compelled her to pursue trumpet as a vehicle for her self-expression.

As an improviser, Erin embodies a warm, lyrical, and sensitive approach to the trumpet. With a sound that is dark, round, and nuanced, her compassionate sensibilities cultivate space in which layers of music may unfold around her. This ensemble-oriented approach allows Erin to create and deliver stories through her music, encompassing the sonic forces around her into her narrative tapestry.

Trombonist and improviser Nicole Connelly grew up in the small rural town of Tolland, CT. From a non-musical family, Nicole, alongside her twin sister Erin, started to develop a relationship with music while attending Tolland High School and the Litchfield Jazz Camp. These formative experiences brought long-lasting musical friendships and developed her desire to pursue a musical education and career.

Starting in 2012, as a Jazz and Commercial Music Major at Towson University, Nicole was immersed in the world of improvisation and found refuge in creative music, the “avant-garde”.  With limitless possibilities and a landscape of sounds, this gave way to finding her distinct voice.

While still in school, Nicole founded the Creative Music Consortium in March 2016, now co-curated with Baltimore-based drummer Asher Herzog, to provide musicians in the surrounding area with a creative musical outlet. Nicole graduated from Towson

University in 2016 with a Bachelors degree in Jazz/Commercial Music. After spending a year playing Trombone professionally in Baltimore full-time, she now resides in New York City where she continues her creative and professional journey.

Over the years, Nicole has studied with a variety of musicians: Alan Raph, while in high school; expanding her post-academic career at Towson University with many faculty members, most notably with Jim McFalls and Dave Ballou. Nicole has also studied with Marshall Gilkes, Ryan Keberle among many others.