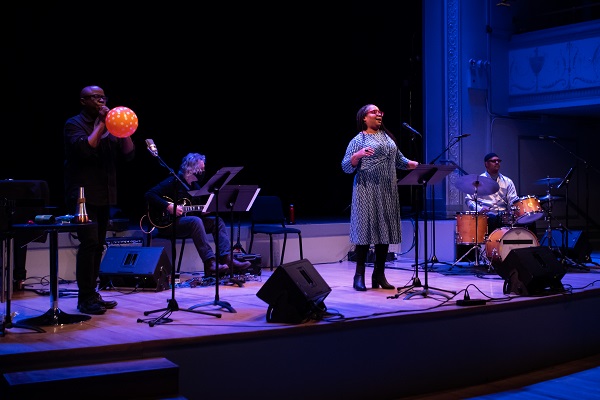 Brooklyn, NY based sound artist/composer Fay Victor hones a unique vision for the vocal role in jazz and improvised music regarding repertoire, improvisation and composition. Victor has an ‘everything is everything’ aesthetic, using the freedom in the moment to inform the appropriate musical response, viewing the vocal instrument as full of possibilities for sound exploration. The voice, a vocal conduit for direct messages in an improvising context. Victor embraces all of these ideas in real time, aiming to push the vocal envelope to forge greater expression. On Victor’s 11 critically acclaimed albums as a leader one can hear the through line of this expansive expression. Victor’s current release is entitled WE’VE HAD ENOUGH on the ESP-Disk record label in October 2020. WE’VE HAD ENOUGH is the 2nd outing from Victor’s improvising quartet, SoundNoiseFUNK.

Victor’s work has been featured in media outlets such as The Wall Street Journal, The New York Times, The San Francisco Chronicle, Rolling Stone Magazine & The Huffington Post; Victor’s performed with luminaries such as William Parker, Roswell Rudd, Dr. Randy Weston, Nicole Mitchell, Misha Mengelberg, Myra Melford, Archie Shepp, Marc Ribot & Tyshawn Sorey to name but a few; Performance highlights include The Museum of Modern Art & The Whitney Museum of American Art (NYC), The Hammer Museum (LA), The Kolner Philharmonie (Germany), De Young Museum (SF), Symphony Space (NY), The Earshot Jazz Festival (Seattle), The Winter Jazz Festival(NYC) and the Bimhuis (Netherlands). As a composer, Victor has been awarded prizes such as the 2017 Herb Albert/Yaddo Fellow in Music Composition and a 2018 AIR in Composition for the Headlands Center for the Arts. As an educator, Victor is currently on the Faculty at the New School of Jazz & Contemporary Music, is an Artistic Director of the Creative Music Studios and gives talks and clinics on Jazz, Creative Improvisation and more at institutions around the world.

“She’s essentially invented her own hybrid of song and spoken word, a scat style for today’s avant-garde.” -The New York Times