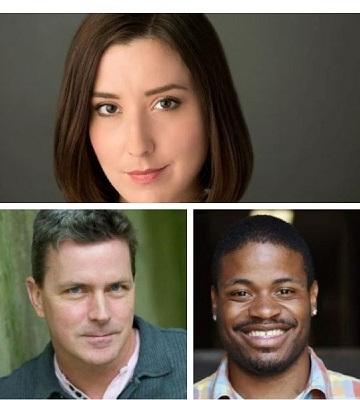 Hand Through The Veil

Renowned author Sir Arthur Conan Doyle has spent years in pursuit of contact with the other side. Famed magician Harry Houdini has been on a parallel journey--to debunk the very notion. With the help of the brash and unpredictable medium Mina Crandon, the two come to the table for one final seance. The baggage all three bring with them results in a chaotic and strange experience that none will ever forget.

Set at the height of the 1920s Spiritualism movement, Hand Through the Veil isolates three of the era’s most prominent personalities in a fictionalized encounter. With liberal doses of fright and humor, it explores the search for truth, not only in circumstances and events but in ourselves. All three characters wrestle with perceptions of who they are versus who they want to be: the author who loathed his most famous creation, the escape artist who longed to be recognized as a magician, and the purported medium on whom this play centers. What if you experienced a moment of sublime talent or skill and could never/seldom repeat it?

Chris Cotterman is an actor and director who has been working on Baltimore's small stages for the past 10 years. As Associate Artistic Director for the Baltimore Shakespeare Factory (2015-2020), he directed productions of Hamlet, Love's Labour's Lost, Julius Caesar, As You Like It, and Much Ado About Nothing. He also directed the premiere of Trish Harnetiaux’s Welcome to the White Room for Glass Mind Theater.