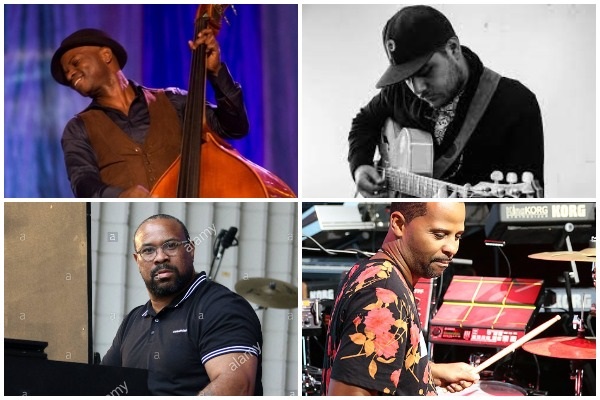 Recording of their performance on 10/2/21

NY bassist Richie Goods, one of the most versatile and accomplished bass players on the scene today and the youngest person ever inducted into the Pittsburgh Jazz Hall of Fame, came to prominence while touring and recording with the late Mulgrew Miller and credits him for much of his success. Richie went on to make a name for himself through recording and touring with a  variety of jazz and popular artists including Sting, The Headhunters, Louis Hayes and the  Cannonball Adderley Legacy Band, Lenny White, Milt Jackson, Whitney Houston, and Christina  Aguilera. His lengthy discography also includes Grammy award-winning and platinum albums of Alicia Keys and Common. Richie most recently toured with popular jazz trumpeter, Chris  Botti for over 5 years.

Known for his ability to “lay down the groove”, Richie infuses funk and gospel influences in his music. He tours the US and internationally extensively, including notable performances at the Monterrey, Montreal, Mendocino, Atlanta, Detroit, San Jose and Jakarta Java Jazz Festivals as well as the Punta del Este International Jazz Festival. Richie, a native Pittsburgher, graduated from the Pittsburgh High School for Creative and Performing Arts and the prestigious jazz program at Berklee College in Boston and studied with such luminaries as Ron Carter and  Ray Brown.

Richie received critical acclaim for his first recording with Nuclear Fusion –“Richie Goods &  Nuclear Fusion Live at the Zinc Bar” (2009), which was followed by “THREE RIVERS” in  2015. Richie’s latest release, recorded with his current band, THE GOODS PROJECT, is a  tribute to his mentor. “My Left Hand Man – A Tribute to Mulgrew Miller” spent 16 weeks on the JazzWeek charts, 8 in the top 20. As one critic observed, Richie Goods truly has music in his  DNA –“a master musician whose tenure with many of music’s greatest names clearly has worn  off on him...”