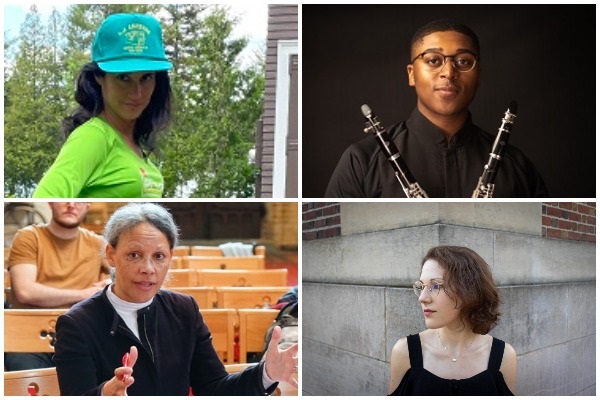 Recording of their performance on 9/4/21

Na’Zir McFadden is the co-founder and clarinetist of the Philadelphia-based wind quintet, Opus(215). He is the conducting apprentice of the Pennsylvania Ballet; a position officially introduced in 2020. He won the most recent clarinet audition to begin as a clarinetist in the United States Navy Fleet Band in January of 2022.

Katrina Toner is a British composer currently studying at the University of Cambridge. She previously studied at the Guildhall School of Music and Drama. Her music has been performed throughout the UK and North America at prestigious venues. She is the current recipient of the King's College/Hartley Rogers CBSO Scholarships in Orchestral Composition, as a part of which the City of Birmingham Symphony Orchestra will workshop and record of one of her pieces.

Althea Talbot-Howard, Composer in Residence, was born in Nigeria, but spent her childhood in England and Australia. She was a choral and instrumental scholar at the University of Cambridge, where she read Archaeology & Anthropology. Postgraduate studies in Oboe took place at the Royal Academy of Music & the Banff Centre for the Arts, Canada. Postgraduate awards include a Fulbright Scholarship and a two-year placement on the Countess of Munster Musical Trust Recital Scheme. Based in London, Althea commenced her professional career in 1992, performing as an oboe concerto soloist, recitalist & orchestral guest principal until 2017, when she formally retired from oboe performance, due to a left hand injury. She now specializes in Composition & Recorder.

Althea Talbot-Howard (b. 1966)
The Door of No Return
Dahomey
Betty’s Hope
The Door of Return
WORLD PREMIERE