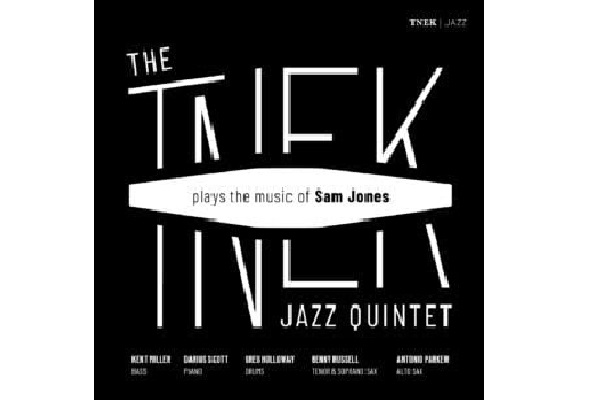 Kent Miller and the Tnek Quintet

Recording of their performance on 7/17/21

The Tnek Jazz Quintet has released a new album paying homage to one of the greatest jazz bassists to ever live. Plays the Music of Sam Jones features bandleader Kent Miller handling the role of Jones, who played with artists like Oscar Peterson, Bill Evans, Cedar Walton, and Cannonball Adderley. His prolific career included several compositions that would become standards, like “Unit 7” and “O.P.”

“One of the things I like about Sam Jones’s music is the intricate horn lines he wrote,” producer Ron Kearns writes in the liner notes. “‘Bittersuite’ is basically a blues but as you listen to the interaction between the horns you may not immediately recognize it as blues. In fact, the horn lines and bass interplay on ‘OP’, ‘Del Sasser’, ‘Lillie’, ‘Some More of Dat’, and ‘Tragic Magic’ (by Kenny Barron) grab your attention as a listener. ‘Unit 7’ was used by Cannonball as an unofficial theme song. Anyone who wants to teach young jazz players how to swing or play with soul just needs to put on a recording of Cannonball and Nat playing this tune.”

The quintet is filled out by pianist Darius Scott, drummer Greg Holloway, saxophonist Antonio Parker, and tenor saxophonist Benny Russell. Miller honors Jones’s music by getting a similarly large tone and non-stop walking groove. He also takes the lead by doubling the melody on “Bittersuite” and dishing out solos throughout.

The Tnek Jazz Quintet Plays the Music of Sam Jones is available now through Amazon.