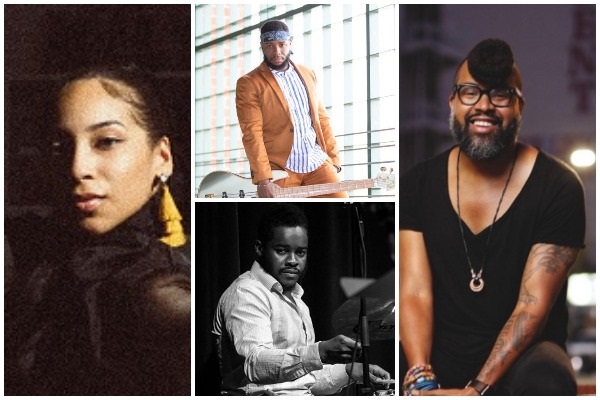 Recording of their performance on 5/25/21

The nephew of legendary blues guitarist Etta Baker, Terrence Cunningham has music in his DNA. He started to play the piano at just 3 years old, and by the time he was 13, Terrence was getting paid as the music director of his church. Three short years later, Terrence found out he would be a father at the age of 16. With the support of his family, he was able to co-parent and still focus on his musical talents. Terrence has spent time performing all over the country and even toured South Africa. After moving to Los Angeles, he landed a spot on the blind auditions for Season 14 of NBC’s The Voice.

Thomas “Adam” Johnson aka TAJ is a multi-talented musician, producer, and writer from Baltimore. It was when he began strumming the chords of his father’s Fender Mustang bass guitar at eleven that he found his calling. Adam has recorded with gospel artists Donnie McClurkin, Jonathan Nelson, Steven Hurd, and Rodney Bryant. You can hear him on Tim Green and Anthony Brown’s latest records. He has written for Jason Nelson and produced on Jai Williams’ latest project. Adam has served as musical director for Stephanie Mills and toured or played for artists who include Vivian Green, Keisha Cole, Ledisi, Jill Scott, Eric Roberson, Cece Winans and Kelly Rowland. Look for his record in summer 2012

Dana Hawkins is a self-taught multi-instrumentalist from Baltimore. In 2001 he placed as a finalist in a national drumming competition, which gave him the confidence to apply to Berklee. He was accepted on a partial scholarship in 2003. Dana is one-half of the progressive jazz duo Evan Marien x Dana Hawkins, with his fellow Berklee alum, a “progressive collaboration of bold bass artistry, dynamic electronic production, and prodigious drumming” in high demand as innovators and performers throughout the U.S. and Europe. When Dana is not on tour or conducting drumming workshops at his alma mater and elsewhere, he performs regular sets around Washington, D.C.