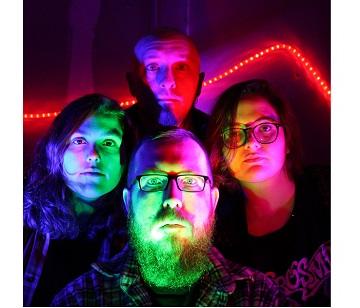 They say, "Comedy is tragedy plus time", so when Queen Wolf began writing their first album as a four-piece band in 2019, they mined personal experiences and unpleasant memories for some lead that could be transmuted into noise. The result is "COMEDY GOLD", a new 10 song album recorded by guitarist Mike Walls in the band's practice space, and mastered by Will Killingsworth at the world-famous Dead Air Studios facility in Massachusettes. Unfortunately, the songs are not particularly funny. You can't win 'em all. "COMEDY GOLD" is available on limited edition vinyl from Audio Esoterica, on cassette from Deciduous Records, and on all streaming services.

Christie Macdonald appeared in a live steaming concert on Aug. 2nd with the Hot Club of Hampden. You can access that show from our Quarantine Concert Catalogue: #72